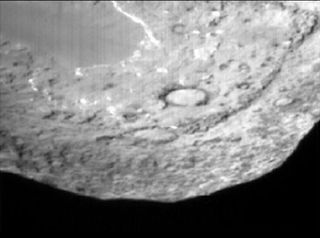 Before Stardust encountered Tempel 1, the comet was visited once before, in July 2005, when NASA's Deep Impact spacecraft plunged a small probe into the icy surface to determine the comet's composition.

The new images from yesterday's Stardust flyby identify the Deep Impact crash site, giving scientists the unique ability to identify changes on the surface of Tempel 1 in the years between the two missions.

"We do have a comparison of the Deep Impact area in 2005 and 2011, and it does show an impact crater," Joe Veverka, Stardust-NExT principal investigator at Cornell University in Ithaca, N.Y., said in a news briefing today (Feb. 15). "Erosion on the scale of 20 to 30 meters of material has occurred in the five or six years since we took the first picture. We are seeing a change, but we have to spend time quantifying the changes and understanding what they mean."

The crater is about 150 meters (492 feet) across, and from the images, the scientists can see where ejecta from the impact came up and fell back to the surface.

"One of the bottom-line messages is that the surface of the comet where we hit is very weak — it's fragile," said Pete Schultz, Stardust-NExT co-investigator at Brown University in Providence, R.I.

Stardust's rendezvous with comet Tempel 1 brought the probe to within 110 miles (178 kilometers) of the icy body at its closest approach, which occurred at 11:40 p.m. EST yesterday (0440 GMT today). As the Stardust spacecraft trekked past, it snapped 72 high-resolution photos of the icy comet.

Comet Tempel 1 is 3.7 miles (6 km) wide, and makes one orbit around the sun every 5 1/2 years. Yesterday's flyby, part of the Stardust-NExT mission, will allow scientists to examine how much the comet has changed since the Deep Impact encounter.

"This is exciting for us, it's the first time we've ever had the opportunity to visit a comet twice," said Tim Larson, Stardust-NExT project manager at NASA's Jet Propulsion Laboratory in Pasadena, Calif.

The first images released from the flyby showed comet Tempel 1 from a distance of about 1,600 miles (2,575 km). These pictures were the first ones taken by the spacecraft as it approached the comet. Mission scientists had hoped that the initial set of photos beamed back to Earth would be five images from Stardust's closest approach, but a minor glitch caused the probe to send the images in chronological order instead.

"It did not jeopardize data onboard," Larson said. "Everything was safely stored in memory and was ready to be sent down. We just had to wait a little longer."

Researchers are also hoping to use Stardust-NExT to map the surface of Tempel 1. The spacecraft took pictures of many of the same areas previously seen by the Deep Impact probe, but Stardust was also able to image new terrain, and will continue to do so as it travels away from the comet.

As Stardust flew by the comet, the spacecraft also encountered the comet's veil of gas and dust. Stardust is equipped with sensors that can detect when the spacecraft is hit by dust particles from Tempel 1.

"Stardust went through this cloud of gas and dust through the comet and had a dozen impacts on the front leading edge of the spacecraft," said Don Brownlee, Stardust-NExT co-investigator from the University of Washington in Seattle.

Scientists found that the material spewed from comets is not done so in a uniform way, but instead comes in intermittent bursts and puffs. Analysis of this data could help scientists understand more about how comets form, and how these primordial objects send gas and dust into space.

The comet-chasing Stardust spacecraft has spent 12 years in space and has traveled more than 3.5 billion miles (5.7 billion km) during that time. In 2004, the probe visited comet Wild 2 and collected samples in a small container that was later returned to Earth.

After Stardust's rendezvous with comet Wild 2, NASA repurposed the spacecraft to visit Tempel 1, and renamed the mission Stardust-NExT, for New Exploration of Tempel.

Yesterday's encounter, however, will likely be the final mission for Stardust, since the spacecraft used up most of its remaining fuel to catch up to comet Tempel 1, researchers said.