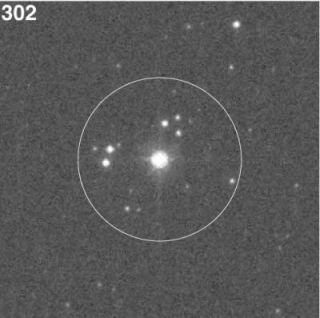 This is Star 302, one of a group of seemingly isolated massive stars, as viewed through the Hubble Space Telescope, which can zoom in roughly 40 times closer than a ground-based telescope. From the ground, everything within the circle appears to be one star. Photo courtesy of Joel Lamb

The most massive stars in the universe can form essentially

The scale of these hefty

The new observations, made using the Hubble Space Telescope,

The most massive stars direct the evolution of their

In the new study, astronomers used Hubble to zoom in on

Even from Hubble's viewpoint, five of the stars had no

The researchers acknowledged the possibility that some of the

But in several cases, the astronomers found wisps of

The study is detailed in the Dec. 20 issue of the Astrophysical Journal.