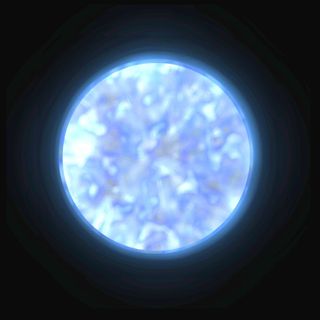 An artist's impression of the zirconium-rich star LS IV-14 116. The white clouds are rich in zirconium and lie above the blue surface of the star.
(Image: © Natalie Behara [Full Story])

A faraway star sparkles with the largest amount of zirconium — the stuff fake diamonds are made from — ever seen, according to a new study.

The star has about 10,000 times more zirconium than our sun, in a form never recorded by astronomers before, researchers said. The strange star also has far more than the usual amounts of other elements like strontium, germanium and yttrium, they added. [Illustration of zirconium-rich star]

"The huge excess of zirconium was a complete surprise," the study's lead author, Naslim Neelamkodan, from Northern Ireland's Armagh Observatory, said in a statement. "We had no reason to think this star was more peculiar than any other faint blue star discovered so far."

The researchers estimate that the zirconium cloud layer on the star weighs about 4 billion tons, or 4,000 times the world's annual production of zirconium.

The star, called LS IV-14 116, is found about 2,000 light-years from Earth in the direction of the border between the constellations Capricornus and Aquarius. It belongs to a class of stars known as helium-rich hot subdwarf stars, researchers said.

Using measurements taken with the Anglo-Australian Telescope at the Siding Spring Observatory in New South Wales, Australia, the researchers analyzed the light thrown off by LS IV-14 116.

They found evidence of various common elements, as expected. But less expected were the strong signals indicating the presence of zirconium, in an odd form that exists only at temperatures above 36,000 degrees Fahrenheit (20,000 degrees Celsius).

This type of zirconium had never been found in an astronomical spectrum, according to researchers.

And there was a lot of it. Zirconium abundances on LS IV-14 116 are 10,000 times higher than those on our sun, researchers said.

The scientists published their results in the journal Monthly Notices of the Royal Astronomical Society.

The unusually high concentrations of zirconium and other metals on LS IV-14 116 are likely found in cloud layers in the star's atmosphere, researchers said. These clouds are the only part of a star that can be imaged directly.

The star may have many different thin cloud layers, each composed of a different metal, researchers said.

The team also suggests that the star is shrinking from being a bright cool giant to a faint hot subdwarf. As the star shrinks, different elements sink down or float up in the atmosphere to a region where they become highly visible, making the apparent composition very sensitive to the star's recent history.

"It was very exciting to discover these completely new chemical signatures in our data," said study co-author Simon Jeffery, also from Armagh Observatory. "The peculiar abundances measured in this star, and hopefully in others, offer a new tool to explore a stage of stellar evolution, which is extremely difficult to observe directly."