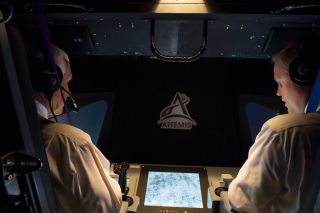 During a tour of NASA's Ames Research Center here on Thursday (Nov. 14), Pence strapped himself into the Vertical Motion Simulator (VMS) alongside NASA Administrator Jim Bridenstine. The VMS, the world's largest flight simulator, has aided the development and testing of many vehicles over the decades, from military aircraft to lunar landers, and serves as a pilot trainer as well.

The moon was the target on Thursday, and the duo achieved mission success, Bridenstine said.

.@NASAAmes is home to the world’s largest flight simulator, the 10-story Vertical Motion Simulator, which will help prepare the next astronauts to land on the lunar surface. Thrilled to have piloted the lunar lander simulation with @JimBridenstine today! pic.twitter.com/7ztNHmazQ0November 15, 2019

"We actually landed on the surface of the moon," Bridenstine, a former Navy pilot who flew combat missions in Iraq and Afghanistan, told a cheering crowd of Ames employees on Thursday. "And let me tell you this: The vice president did it better than I did. Now, he might have had an instructor with him — me — but still, he did it better than I did."

"Thanks for letting me get in that simulator," the vice president said during his nearly 30-minute speech at Ames. "That was about the coolest thing I've done in a long time.

Pence visited Ames primarily to highlight the center's contributions to NASA's Artemis program of crewed lunar exploration. Artemis aims to land two astronauts near the moon's south pole in 2024 and establish a long-term, sustainable human presence on and around Earth's nearest neighbor by 2028. Achieving these goals will teach NASA the skills and techniques needed to send astronauts to Mars, agency officials have stressed.

The vice president, who also chairs the U.S. National Space Council, saw more than just VMS at NASA Ames. Pence also toured the center's Arc Jet Complex, where engineers develop and test spacecraft heat-shield technology, and talked to team members of the Ames-led VIPER mission (short for "Volatiles Investigating Polar Exploration Rover"), which will land near the moon's south pole in December 2022 to characterize the region's stores of water ice.

Pence was just the third vice president to visit Ames, after Lyndon Baines Johnson in 1961 and George H.W. Bush in 1988. No sitting president has ever toured the Silicon Valley center, though a number have used the onsite Moffett Federal Airfield.