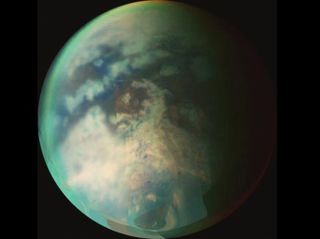 Titan's surface is difficult to see through the thick haze of its atmosphere. Scientists suspect the moon may have dust devils, just like Earth and Mars.
(Image: © NASA/JPL/University of Arizona)

Dust devils could be swirling around on Saturn's huge moon Titan, a new study reports.

If these dry whirlwinds do indeed s whip across Titan's surface, they may be the primary movers of dust on the far-off world.

"Mars' atmosphere is really, really dusty, and dust plays an important role in the climate," Jackson said. "Dust devils are probably, if not the dominant mechanism, one of the most important mechanisms for lofting the dust."

Titan's atmosphere is one and a half times the density of our planet's air and doesn't seem to host huge, gusty winds, Jackson said.

"It's just this enormous, puffy atmosphere," he said."When you've got that much air, it's hard to get it churning. So, you just don't usually get big winds on the surface of Titan so far as we know."

Therefore," unless there is a big storm rolling through, there's probably not that much wind, and so dust devils may be one of the main dust transport mechanisms on Titan — if they exist," Jackson said.

He and his colleagues applied meteorological models to 2005 Titan data gathered by NASA's Cassini spacecraft, which observed the moon repeatedly during its tour of the Saturn system from 2004 to 2017.

Previous studies have confirmed that there is dust — likely composed of organic material — actively blowing around on Titan's surface. In applying their models, the research team found that the conditions on the surface of Titan could be conducive to dust devils. This could inform our understanding of erosion and how winds distribute different materials on the world and in its atmosphere, the researchers said in the study.

The researchers also noted that "when we plug the numbers in for how much dust the dust devil ought to lift based on the wind speeds we see, they seem to be able to lift more dust than we would expect," Jackson said in the same statement. So it's possible that "there may be some other mechanism which is helping them pull this dust — or the equations are just wrong."

So, this work doesn't confirm whether or not there are dust devils on Titan; it only shows that the conditions on the moon's surface could support them. However, in the not-too-distant future, data from NASA's Dragonfly mission could confirm whether or not these dust whirlwinds are, in fact, swirling around on the moon. (Dragonfly is scheduled to launch in 2026 and land on Titan in 2034.)

Also, while Dragonfly is likely to encounter these dust devils (if they do exist), they "are unlikely to pose a hazard to the mission," according to the researchers in the study.

This work was published March 3 in the journal of Geophysical Research.