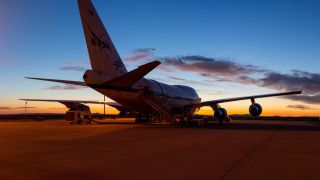 SOFIA, an airborne observatory run by a joint program between NASA and Germany's space program, DLR, is seen here in Palmdale, California, before its flight to Germany in September 2019
(Image: © DLR/NASA)

Today (Sept. 18) a unique airborne space observatory will perform its first scientific flight over Europe. Its mission will be to study activity around a pair of co-orbiting black holes about 600 million light-years away from Earth.

SOFIA, or Stratospheric Observatory for Infrared Astronomy, is a modified Boeing 747 jumbo jet that ascends to our stratosphere — between 38,000 to 45,000 feet (11,582 to 13,716 meters) high — so that the 2.7-meter (106 inches) reflecting telescope on board can be above 99% of the part of Earth's atmosphere that absorbs infrared light coming from the cosmos.

This joint project of the German Aerospace Center (DLR) and NASA allows astronomers to study the universe with greater clarity. And by observing in infrared light, scientists can look at the heat energy emitted from objects in the universe and study distant structures that would otherwise be obscured by clouds of dust.

SOFIA will perform a 10-hour flight over Europe between today and tomorrow (Sept. 19), according to a statement from DLR. The airborne observatory was expected to arrive at Stuttgart Airport in Germany on Sunday (Sept. 15), where a large welcoming reception awaited the scientific plane, according to officials from the University of Stuttgart. But there was a technical problem involving the wing and poor weather conditions at the aircraft's home base in Palmdale, California, where it was going to take off, so SOFIA's flight was delayed by 24 hours.

When it takes off, SOFIA will be studying several objects in the universe, and its key focus will be on Markarian 231, a galaxy located about 600 million light-years away. That's about 300 times farther away than Andromeda, the Milky Way's closest neighboring galaxy — and so far away that the light we see coming from the galaxy today began traveling this way before our planet developed multicelled life.

According to DLR, this distant galaxy is one of the brightest and best-known ultraluminous infrared galaxies. At its center, it hosts two black holes of different sizes. This active galactic nucleus is interesting to scientists wanting to learn if the jets of material spewing from the centers of certain galaxies are caused by the presence or absence of magnetic fields. This research will be accompanied by other projects looking at stellar births and deaths.

DLR also reported that a team from the popular German children's television show "Broadcast with the Mouse" ("Sendung mit der Maus") will fly along with the scientists on today's flight, and an upcoming episode will feature SOFIA in a special segment about telescopes and infrared astronomy.