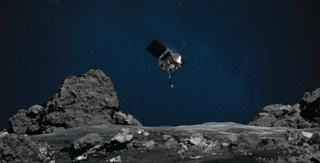 An artist's depiction of the OSIRIS-REx spacecraft approaching the surface of the asteroid Bennu for a sampling attempt.
(Image: © NASA/Goddard/University of Arizona)

After delays from the coronavirus pandemic, NASA has picked a date for its spacecraft to snatch up a chunk of space rock to bring home.

NASA's OSIRIS-REx spacecraft mission is now expected to perform its first asteroid-sampling attempt to occur on Oct. 20. The procedure had previously been scheduled for August, but the mission team has decided to delay the maneuver because of limitations meant to slow the spread of the coronavirus-borne respiratory disease COVID-19.

"The OSIRIS-REx mission has been demonstrating the very essence of exploration by persevering through unexpected challenges," Thomas Zurbuchen, NASA's associate administrator for science, said in a statement. "That spirit has led them to the cusp of the prize we all are waiting for — securing a sample of an asteroid to bring home to Earth, and I'm very excited to follow them through the home stretch."

OSIRIS-REx (its name is short for Origins, Spectral Interpretation, Resource Identification and Security Regolith Explorer) arrived at the asteroid Bennu in December 2018 and has spent the intervening months surveying the space rock. In particular, OSIRIS-REx has focused on identifying potential sampling sites.

That process has been more complicated than expected, as Bennu turned out to be much rockier than scientists had predicted at the mission's launch, which could threaten the spacecraft's safety during the procedure. The survey resulted in four candidate sampling sites, each nicknamed for a type of bird.

In April, the spacecraft conducted a sampling rehearsal, which involved slowly approaching the asteroid's surface to a height of just 213 feet (65 meters). That practice maneuver went smoothly, according to the mission team. However, OSIRIS-REx personnel decided that having more time to prepare for the second rehearsal and the sampling maneuver itself was important given how tricky collaboration has become.

In response, the team shifted the sampling schedule by two months, with the second rehearsal now planned for Aug. 11 and the sampling itself planned for Oct. 20. The spacecraft has storage compartments for up to three samples. If the first sampling procedure goes smoothly and fills those compartments, NASA will call it a day, not attempting additional sample collections.

Either way, the spacecraft will remain at asteroid Bennu through the middle of next year, then embark on a two-year journey home. OSIRIS-REx's sample container will deliver the space-rock sample back to Earth on Sept. 24, 2023.