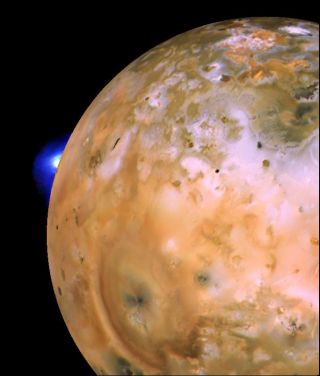 The biggest volcano on the Jupiter moon Io should erupt any day now, a new study suggests.

Loki Patera, a 125-mile-wide (200 kilometers) lava lake on the most volcanically active body in the solar system, has had fairly regular activity over the past few decades. And it's due for an outburst very soon.

"If this behavior remains the same, Loki should erupt in September 2019, around the same time as the EPSC-DPS meeting in Geneva," Julie Rathbun, a senior scientist at the Planetary Science Institute in Tucson, Arizona, said in a statement yesterday (Sept. 17). "We correctly predicted that the last eruption would occur in May of 2018."

EPSC-DPS is a joint conference held by the European Planetary Science Congress and the American Astronomical Society's Division for Planetary Sciences, and it's going on now. Rathbun presented the new results at the meeting yesterday.

Scientists aren't sure what drives Loki Patera's outbursts, but the leading explanation posits a process very different than what's behind typical volcanic eruptions here on Earth: The top layer of Loki Patera solidifies, then falls into the still-liquid portion below.

And the intrigue surrounding Loki Patera doesn't stop there; the periodicity of the lake's eruptions has changed over the decades as well. The outbursts occurred every 540 Earth days or so in the 1990s. The periodic behavior seemed to stop in the early 2000s but reappeared around 2013, with eruptions now happening roughly every 475 days.

Given all these shifts and uncertainties, Rathbun isn't exactly betting the farm on a Loki Patera flare-up in the next few days.

"Volcanoes are so difficult to predict because they are so complicated. Many things influence volcanic eruptions, including the rate of magma supply, the composition of the magma — particularly the presence of bubbles in the magma, the type of rock the volcano sits in, the fracture state of the rock and many other issues," Rathbun said in the same statement.

"We think that Loki could be predictable because it is so large," she added. "Because of its size, basic physics are likely to dominate when it erupts, so the small complications that affect smaller volcanoes are likely to not affect Loki as much. However, you have to be careful because Loki is named after a trickster god [in Norse mythology], and the volcano has not been known to behave itself."

Loki Patera's activity cycle is far too lengthy to be tied to Io's orbit around Jupiter, which is supertight; the moon completes one lap every 1.77 Earth days. So, researchers think that gravitational interactions among Io and some of its fellow moons may be responsible for the (semi) regularity.

Jupiter's powerful gravity is the root cause of Io's volcanism overall, however. The planet's constant tug stretches Io's innards, melting moon rock into magma via tidal heating. (Reminder: Lava is just magma that has reached the surface of a planet or moon.)