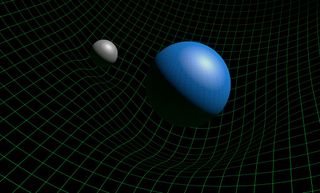 Is our fundamental reality continuous or is it chopped up into tiny, discrete bits?

Asked another way, is space-time smooth or chunky? The question cuts to the heart of the most fundamental theories of physics, linking together the way space and time intersect with the material of our everyday existence.

However, experimentally testing the nature of space and time has been impossible, because of the extreme energies needed to probe such tiny scales in the universe. That is — until now. A team of astronomers has proposed an ambitious new plan to use a fleet of tiny spacecraft to detect subtle changes in the speed of light, a hallmark of some of the most mind-bending theories of the cosmos. If space and time are indeed broken up into little bits, the research could pave the way for a completely new understanding of reality.

The question of "what is space and time?" goes back thousands of years, and our modern understanding rests on two strangely incompatible pillars: quantum mechanics and Einstein's theory of general relativity.

In general relativity, space and time are woven together into the unified fabric of space-time, the four-dimensional stage that underpins our universe. This space-time is continuous, which means that there are no gaps anywhere; it's all a smooth texture. Space-time isn't just a platform for us to act our parts, however; it's also a player too: The bending and warping of space-time gives us our experience of gravity.

In the opposite corner, a set of rules called quantum mechanics governs the interactions of the very tiny things in the universe. Quantum mechanics rests on the idea that not much of our everyday experience is smooth and continuous, but chunky. In other words, it's quantized. Energy, momentum, spin and so many other properties of matter come in only discrete little packets.

What's more, quantum mechanics itself also splits itself into two camps. On one hand, we have the familiar particles of our everyday existence, such as electrons and protons, that interact and do other interesting things. These are obviously very chunky, as they're discrete "things." On the other hand, we have the quantum fields. In the subatomic world, each kind of particle has its own field that spreads throughout space-time; when we think of particles, we think of little vibrations in their fields, which in turn interact with other particles, and do some other interesting things. The fields are understandably very smooth.

Bits of time and space

So, we have some smooth pictures of our universe and some chunky ones. When it comes to space-time itself, we can easily imagine extending the concepts of quantum mechanics all the way to their logical conclusion, and ruling that space and time are discrete: The very fabric of reality is divided up like pixels on a computer screen, and what we experience as smooth, continuous movement is nothing but a grid of discrete pixels at the tiniest of scales.

Many theories of merging together quantum mechanics and general relativity, like string theory and loop quantum gravity, predict some form of discrete space-time (although the precise predictions, interpretations and implications of that chunkiness are still poorly understood). If we could find evidence for discrete space-time, it would not only completely rewrite our understanding of reality, but also open the door to a revolution in physics.

This discreteness can reveal itself only in the most subtle ways; otherwise we would've spotted it by now. Various theories have predicted that if space-time were indeed chunky, then the speed of light may not be entirely constant — it may shift ever so slightly depending on the energy of that light. Higher energy light has a shorter wavelength, and when the wavelength becomes small enough, it can "see" the chunkiness of spacetime. Imagine walking down sidewalk: with big feet you don't notice any small cracks or bumps, but if you had microscopic feet you would trip over every little imperfection, slowing you down. But this shift is incredibly tiny; if space-time is discrete, it's on a scale more than a billion times smaller than what we can currently probe in our most powerful experiments.

A quest for the grail

Enter GrailQuest: the Gamma-ray Astronomy International Laboratory for Quantum Exploration of Space-Time. A team of astronomers submitted a proposal for this mission in response to a call for new space-time-hunting ideas from the European Space Agency (ESA). Their proposal is detailed in the arXiv database, meaning that it hasn't yet been reviewed by peers in the field.

Here's the scoop: In order to see if the speed of light changes with different energies, we need to collect a huge amount of the highest-energy light in the universe, and GrailQuest hopes to do just that.

GrailQuest consists of a fleet of small, simple spacecraft (the exact number varies, from just a few dozen if the satellites are larger to well over a few thousand if they're smaller) to constantly monitor the sky for gamma-ray bursts. These are some of the most powerful explosions in the universe. Like their name suggests, these bursts release copious amounts of high-energy photons, a.k.a. gamma rays. These gamma rays travel across billions of years before reaching the fleet of spacecraft, which record the energy of the gamma rays and the differences in timings as the burst washes over the fleet.

With enough accuracy, GrailQuest might be able to reveal if space-time is discrete. At least, it has the right setup: It's examining the highest-energy light (which is affected the most in theories that predict that space-time is chunky); the gamma rays have been traveling for billions of light-years (allowing the effect to build up over time); and the spacecraft are simple enough to produce en masse (so the entire fleet can see as many events as possible, all across the sky).

How would our conceptions of reality change if GrailQuest were to find evidence for the discreteness of space-time? It's impossible to say — our current theories are all over the map when it comes to implications. But no matter what, we're going to have to wait. This round of ESA proposals is for launches sometime between 2035 and 2050. While we're waiting, we can debate if the time elapsed between now and then is fundamentally smooth or chunky.