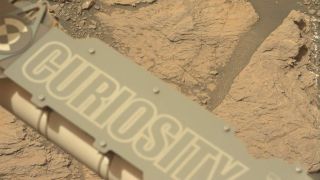 The Curiosity rover captured this image shortly before a computer glitch on Feb. 15 put a damper on science for the weekend.
(Image: © NASA/JPL-Caltech/MSSS)

NASA's Curiosity rover on Mars went into safe mode last weekend after an error booting up on Feb. 15, but the rover is communicating normally and should be able to resume science operations soon, according to a statement from the agency.

The safe mode incident began just days after NASA formally ended the mission of its longest-running rover, Opportunity, which has been radio silent since June. Fortunately, Curiosity's troubles are nowhere near as serious.

"We're still not sure of its exact cause and are gathering the relevant data for analysis," Steven Lee, Curiosity's deputy project manager at NASA's Jet Propulsion Laboratory in California, said in the statement. "The rover experienced a one-time computer reset but has operated normally ever since, which is a good sign."

Since the original error, rebooting hasn't been a problem — Curiosity has smoothly booted up more than 30 times. However, the team is still pinpointing what precisely caused the error and how best to avoid it in the future. In order to preserve data about the incident itself, science operations are temporarily on hold.

"In the short term, we are limiting commands to the vehicle to minimize changes to its memory," Lee said. "We don't want to destroy any evidence of what might have caused the computer reset."

While all should be back to normal again soon, the timing is a torment for Curiosity's science team, which spotted an intriguing rock they want to drill just 656 feet (200 meters) away from the rover. It's part of the clay-rich region that Curiosity just recently began to explore.

"The science team is eager to drill our first sample from this fascinating location," Ashwin Vasavada, Curiosity's project scientist, said in the same statement. "We don't yet understand how this area fits into the overall history of Mount Sharp, so our recent images give us plenty to think about."