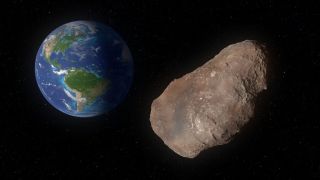 Another day, another pyramid-size space rock barreling past Earth.

However, "close" by space standards is by no means near enough that the rock will pose a threat to Earth. At its nearest, the hefty object's trajectory will carry it to a distance of more than 4 million miles (6 million kilometers). To put that into perspective, the moon orbits about 238,000 miles (380,000 km) from Earth, and the closest planet, Venus, is about 25 million miles (40 million km) away from us.

Another pyramid-size asteroid cruised past Earth in July. And recent reports may make it seem like there's a massive asteroid — car-size, football-field-size, skyscraper-size — speeding past us every few days. In fact, there usually is, according to CNEOS data. Space is littered with rocky debris and particles of all sizes; 100 tons (90 metric tons) of space dust bombards Earth each day, though most pieces are no bigger than a grain of sand, according to NASA's Jet Propulsion Laboratory at Caltech.

By identifying and tracking large NEOs over time, space agencies can determine whether these rocks might be on a collision course with our planet. Currently, CNEOS estimates that the biggest impact risk is from an object named 29075, measuring nearly 1 mile (1.3 km) in diameter and traveling at over 31,000 mph (nearly 50,000 km/h) — though, it isn't due to arrive until 2880.

But if you're worried about the next asteroid flyby turning apocalyptic for Earth, you should calibrate your concern; there are plenty of other, more-mundane dangers that pose a far higher risk, according to CNEOS.

"The threat to any one person from auto accidents, disease, other natural disasters and a variety of other problems is much higher than the threat from NEOs," CNEOS says.