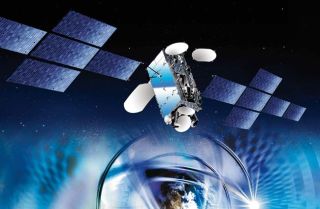 An artist's depiction of the Eutelsat W3B satellite.
(Image: © Eutelsat)

PARIS — A communications satellite launched Thursday (Oct. 28) has been declared a total loss following the discovery of a sizable leak in its fuel reservoir, and ground teams are now scrambling to determine whether they can raise the satellite into a graveyard orbit or must guide it into the atmosphere to be destroyed, the satellite's owner and builder said.

Europe's Ariane 5 ECA rocket, in what appeared to be a smooth flight, placed the 5,370-kilogram satellite — the Eutelsat W3B — into a transfer orbit with a perigee of 249.2 kilometers and an apogee of 35,907 kilometers, which was the satellite's intended destination.

From this transfer position, spacecraft use their own power to circularize their orbit in the days following launch to reach final geostationary position about 36,000 kilometers over the equator. [Most Memorable Space Debris Events]

Whether it will be possible, or advisable, to conduct the series of firings of the satellite's on-board engine needed to raise the spacecraft into a graveyard orbit at least 250 kilometers above the geostationary arc, out of the way of most working satellites, remained unclear in the early morning hours following the launch at the Guiana Space Center in French Guiana, said Emmanuel Grave, executive vice president for telecommunications satellites at Thales AleniaSpace, which built the satellite.

In an interview, Grave said the leak in the oxidizer tank is too large to have escaped notice as the satellite was being prepared for integration into the Ariane 5 rocket alongside Japan's BSat-3b satellite, which was launched at the same time and is reported in good health.

Teams from Thales Alenia Space and Paris-based Eutelsat tracking the satellite after its separation from the Ariane 5 upper stage from a control center in Rambouillet, France, duly noted that it sent the expected signals once in orbit. But soon after, the satellite's telemetry also disclosed a leak in the propellant system that is so large that there is no hope of squeezing even a limited commercial life from W3B.

Grave said the priority now is to determine how best to dispose of W3B. From transfer orbit, the spacecraft is not within radio contact of ground teams for long periods. Decisions must be made as to how much fuel life is available, and whether that fuel should be used to raise W3B's perigee to provide a more-stable orbit, or guide it into a controlled destructive atmospheric reentry, perhaps over the South Pacific Ocean.

Thales Alenia Space officials have experience in this type of maneuver, having been forced to send their Astra 1K satellite, owned by SES of Luxembourg, into the atmosphere after the malfunction of a Proton rocket upper stage in November 1995.

Grave declined to speculate on what caused the leak beyond saying it must have occurred after the launch. He said the components used are not new, and that nothing in the satellite's month-long preparation at the French Guiana spaceport suggested an issue with the propellant reservoir.

An official with the Arianespace launch consortium said the company will be reviewing launch telemetry in detail but that, after a first view, the launch did not appear to encounter any special stresses as the rocket climbed through the atmosphere and sustained the usual period of maximum dynamic pressure on the vehicle.

In an Oct. 29 statement, Eutelsat said it will immediately order a new satellite, to be called W3D, as a result of the loss of W3B. The company will also keep at their current location at 16 degrees west the three satellites that W3B was intended to replace.

A nearly identical satellite, called W3C, is under construction at Thales Alenia Space and scheduled for launch, aboard a Chinese Long March rocket, in mid-2011.

W3B was insured as part of a $2.5 billion, seven-satellite package secured by Eutelsat in 2008. It is the second satellite in this group to suffer a major anomaly, following the W2M spacecraft, which had a solar array problem and is operating at reduced capacity.

Pending the results of the W3B failure investigation, the smooth countdown for the 39th consecutive Ariane 5 success makes it more likely that Evry, France-based Arianespace will be able to conduct the two next Ariane 5 missions as scheduled in late November and late December. Completing six flights before it closes its 2010 accounts is important for the company, whose financial equilibrium has been upset by launch delays of flights that have placed a seven-launch year beyond its reach.

W3B, a Spacebus 4000C3 satellite frame, carries 53 Ku- and three Ka-band transponders and was designed to produce more than 12 kilowatts of power at the end of its 15-year life. It was to have replaced the Eurobird 16, W2M and Sesat 1 satellites at the 16 degrees east slot. These three satellites then would have been redeployed to other locations.

In addition to serving Eutelsat's 11.2 million television homes in Central Europe, W3B's beams were to focus on Mauritius and Reunion islands in the Indian Ocean, and on sub-Saharan Africa. The African coverage was to provide cellular-telephone backhaul and Internet access.

W3B initially was intended for launch aboard a Chinese Long March vehicle. Eutelsat switched to Ariane, and transferred its Chinese launch reservation to another Eutelsat satellite, when a temporary shortage of certain made-in-Europe components raised questions about whether W3B as launched would be "ITAR-free," meaning devoid of U.S. parts prohibited for export to China.

The BSat-3b satellite, built by Lockheed Martin Space Systems, uses Lockheed Martin's A2100 satellite skeletal structure and an example of how light this satellite frame can get. BSat-3b weighed just 2,060 kilograms at launch and caries 12 130-watt Ku-band transponders. It will be added to BSat's fleet for direct-to-home television and operate at 110 degrees east.