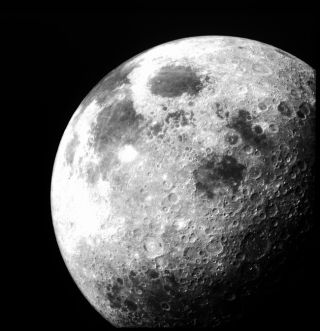 The Battered Moon is expected to yield vital clues as to Earth's own bombardment in the past. Photo taken by Apollo 12 crew.

Not only the U.S., but European, Indian, Japanese and Chinese probes are being readied for a new scientific assault on the Moon, hoping to glean insight about lunar ice, the Moon's cratering history, and even how that big, dusty ball of rock got there in the first place.

Surprisingly, Apollo expeditions at $25 billion not only scratched the lunar surface but also promoted new question?

Even to the untrained eye, just looking at the bruised and battered Moon suggests it has a tale to tell.

"The Moon is like a witness plate. We have an impact record...we just have to play the record," said Paul Lucey a professor at the Hawai'i Institute of Geophysics and Planetology at the University of Hawai'i in Honolulu. The Moon offers insight into how impacts shaped the Earth and played a role in the formation of life here on Earth, he said.

Additionally, Lucey said, the Moon's poles are "luna incognita"--unknown and unexplored territory. "It all boils down to the fact that the tilt of the Moon with respect to the Sun is so little...craters there can remain permanently shaded from the Sun."

These craters are dubbed "cold traps"--locales of super-chilly temperatures--perhaps even colder than measurements made in the Saturn system, Lucey told SPACE.com. What's key is the idea that Moon-impacting comets unleashed their vast reservoirs of chemistry into the lunar environment.

Along with water ice, molecules of methane, maybe ammonia and carbon dioxide, among other comet constituents, migrated like celestial holes in one into those cold, Sun-shy craters. "All kinds of things could potentially go there," Lucey noted.

There has been detection of possible water ice at the poles of Mercury by radar, perhaps brought there by comets or asteroids hitting the planet. That detection at Mercury, however, is far stronger than hydrogen enhancements found at the lunar poles, Lucey continued.

Why that's the case is a bit of a mystery.

One idea, Lucey said, is that the deposit on Mercury is a fluke. It's a recent impact that will go away in some short period of time. Another view is that when the Moon passes through Earth's magnetotail--a long, trailing limb of the Earth's magnetosphere on the side facing away from the Sun--it blowtorches the Moon influencing the near side deposits. Deposits on the lunar farside could be protected from such a blasting, he speculated.

"Scientifically, whether or not you've got a thick deposit, it is interesting either way. It' a cold trap so something is going to be there. It might not be enough to cause astronauts to use it as a filling station...but, scientifically, it's a resource," Lucey said.

If there's an inventory of cometary ice at the poles, it is also exposed to cosmic rays, especially high-velocity protons. Laboratory experiments show if you expose cometary ice to high-energy protons, "it makes organics really good," Lucey added. "So the deposit could be being converted from an ice to kind of a waxy, gooey stuff. And that may have different radar properties. So who knows?"

The Moon is a key to planetary science and exploration, suggested Bernard Foing, Chief Scientist for the European Space Agency (ESA) and Executive Director of the International Lunar Exploration Working Group. "Lunar data can teach us about the formation and evolution of rocky planets and moons, and about our origins," he said.

The Moon carries a record of the bombardment history in the inner Solar System, which was erased on Earth, Foing said. Also the gravity, physical and chemical signature of giant impact basins is still imprinted on the lunar surface. The physics of impact processes can be investigated on different scales, making use of remote sensing, right-on-the-spot investigations, and via return samples brought back to Earth for detailed scrutiny, he said.

"The lunar surface is also a huge collector for samples from comets, asteroids, or even the early Earth, from the era of giant bombardment or emergence of life," Foing said.

But there's a major question still to be firmly resolved. Just how was the Moon formed?

Foing explained that the current consensus is that a Mars-size planet embryo impacted the proto-Earth, and that the Moon resulted from the re-accretion of material ejected during the impact, coming mostly from that impacting object.

By deciphering the global composition of the Moon, that can help sort out a picture of the proto-Earth and of the processes that followed the impact. "The compositional similarities between Earth and Moon are still a puzzle," Foing said.

Origin of the Moon: Unsolved problem

Not signed up to the giant impact theory is Paul Lowman, a planetary geologist at NASA's Goddard Space Flight Center in Greenbelt, Maryland. "A lot had to happen very fast. I have trouble grasping that," he said.

"You have to do too much geologically in such a short time after the Earth and the Moon formed. Frankly, I think the origin of the Moon is still an unsolved problem, contrary to what anybody will tell you," Lowman said.

Lowman said that there is a treasure trove of data still to be plumbed from data acquired decades ago during the Apollo program. For instance, he has been taking another look at images snapped by moonwalkers from the Apollo 15, 16, and 17 landings, finding evidence for layered structure in lunar highland crust.

Working with Tiffany Yang, a research colleague, Lowman has reviewed hundreds of lunar surface shots, identifying layers in the surrounding terrain that are not explainable as overlapping layers of ejecta from craters or mare basins. He reported here at the LPSC that this pervasive layering is the expression of lava flows.

"Data has been sitting around and never properly studied. We were overwhelmed by the information from Apollo. People never went back to it," Lowman said. Thanks to new and better techniques, like digital processing, giving Apollo-era pictures and other data another look can prove valuable, he said.

Ask Carle Pieters, a planetary scientist in the Department of Geological Sciences at Brown University in Providence, Rhode Island, what's left to do on the Moon and she's quick to answer.

"Lots! And it will take us many, many missions to explore the Moon the way a planetary body of such importance should be explored," Pieters responded.

Few people realize how little has been done since the Apollo landings on the Moon and returned a few lunar rocks and soil to Earth for detailed study, Pieters emphasized. The phenomenal achievement of Apollo was well before the development of highly sophisticated instruments that we now take for granted as sensors around Earth, she said.

Pieters said the Moon is valuable because it retains the secrets of early solar system evolution that have been lost on its larger cousins. Furthermore, the Moon is important because it is accessible and its surface is pure geology--without the effects of climate and biology--allowing scientists to study how silicate planets work and evolve.

Get down to work

The Moon is prized property, Pieters added. These are big issues to deal with at the Moon and each requires detailed information. "The initial reconnaissance is over. We must get down to work," she said.

Looking at the Moon in wonder is one thing. Actually getting your science gear there to probe for answers is another.

Pieters and her team are now readying a Moon Mineralogy Mapper, or M3, best pronounced as M-cube. Right now, the instrument is not headed for the Moon. It'll first be shipped to India for installation with other science sensors onboard Chandrayaan-1, a lunar probe now being built by the Indian Space Research Organization (ISRO) for a late 2007 sendoff.

M3 is designed to provide detailed compositional information about the Moon in a spatial context appropriate to lunar geology, Pieters said. "We cannot unravel the geologic sequence of events--how and why--without knowing what is where," she said.

Most of the information about the Moon is based on a small region on the lunar nearside that was visited by Apollo crews and Russian Luna landers.

"We now know these areas are not representative for much of the Moon," Pieters explained. With the little remote sensing we have from the recent U.S. Department of Defense Clementine (1994) and NASA's Lunar Prospector (1998-1999) missions, she continued, "we now know we're missing a lot."

For example, Pieters puts high on her lunar laundry list these questions: Has the enormous lunar south pole Aitken Basin on the Moon's farside excavated into the lunar mantle?

What happened in the first few hundred million years to cause the lunar nearside to be so very different from the farside?

What caused the pockets of iron-rich materials in the primitive crust?

What are the deposits near the lunar poles and what other possible resources have we missed?

"As a planetary scientist who has been awed by the series of exploration missions and discoveries of the last few decades for the outer solar system and Mars, I am thrilled that we are finally returning to the Moon," Pieters said. "I am particularly pleased that this is being done in an international environment with major contributions from ESA nations, Japan, India, China and the United States. If there was ever an opportunity to demonstrate peaceful cooperation in major scientific undertakings, the next decade is it!"

Given that the number of nations studying the Moon is growing so too has the role of the International Lunar Exploration Working Group--a forum for coordination between world-wide lunar exploration initiatives, ESA's Foing said.

Already on lunar duty is ESA's SMART-1. It totes a suite of instruments to chart the elemental and mineralogical composition of the lunar surface, as well as survey the Moon's polar regions.

A Japanese mission, Lunar-A, is to be launched to emplace two penetrators with seismometers that can diagnose the lunar internal structure and core, Foing said. In 2006-2007, Japan is also expected to launch the Selene lunar orbiter with a comprehensive set of instruments for remote sensing, gravity, plasma, and radio science measurements.

Then there's Chandrayaan-1, the Indian lunar scientific mission, and the Chinese Chang'E 1 orbiter due for launch in 2007. NASA is also now working on the Lunar Reconnaissance Orbiter to be lofted in 2008.

All this adds up, in Foing's view, to not only scientific study of the Moon, but renovating Earth's next door neighbor into emergency shelter.

"The Moon is an ideal test bed for the development of instruments, geophysical stations, robotic outposts, international robotic villages, in-situ resource utilization, deployment of large infrastructures, or astrobiology and life science laboratories," Foing said. "A permanent lunar settlement may become, in case of global catastrophe on Earth, the only possible temporary refuge for humans and other living species."