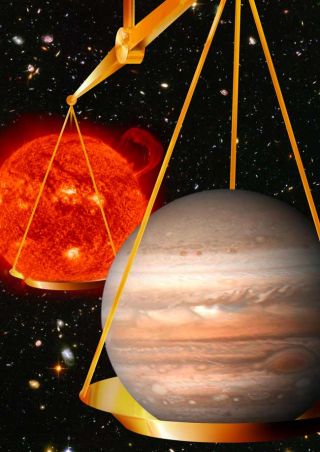 An international research team has come up with a new way to weigh the planets in our solar system, using radio signals from pulsars.
(Image: © CSIRO)

Anew method for "weighing" the planets in our solar system ? one thatrelies on the radio signals delivered from highly magnetized spinning stars ? hasbeen developed by an international research team.

Observationsof a set of four of these peculiar spinning stars, called pulsars, were used to calculate the masses of Mercury,Venus, Mars, Jupiter and Saturn, including ? for the first time ? their moons orrings.

Previously,astronomers determined a planet's mass by relying on the readings of spacecraftthat zoomed past ? such measurements are still considered the most accurate ?or by measuring the orbits of the planet's moons. Both the size of the orbitand the length of time needed to complete one are indicators of how massive aplanet is, since orbits are determined by gravitational pull, and that pull is largelya product of the planet's mass.

?Thisis first time anyone has weighed entire planetary systems ? planets with theirmoons and rings,? said research team leader David Champion of the Max PlanckInstitute for Radio Astronomy in Bonn, Germany. ?In addition, we can provide anindependent check on previous results, which is great for planetary science.?

Thenew technique is quite precise ? sensitive to about 0.003 percent of Earth'smass, and a tenth of a millionth of Jupiter's mass. [Gallery:Planets of the Solar System]

Themethod developed by Champion and his colleagues, is based on corrections thatastronomers make to the regular radio wave "blips" that come fromdistant pulsars.

Asthe Earth travels around the sun, that movement affects the time it takes for pulsar signalsto arrive at our planet. In order to get around this effect, astronomersinstead calculate when the pulses would have arrived at the solarsystem's center of mass.

Thispoint, called the barycenter, is the rotation center for all the planets. Sincethe arrangement of the planets around the sun changes over time, the barycenteralso changes relative to the sun.

Tolocate the barycenter, astronomers use both a table with the positions of theplanets in the sky (called an ephemeris) and the values for the planetarymasses that have already been measured.

Ifthese figures are wrong and the position of the barycenter is inaccurate, thena regular, repeating pattern of timing errors can be detected in the pulsardata.

"Forinstance, if the mass of Jupiter and its moons is wrong, we see a pattern oftiming errors that repeats over 12 years, the time Jupiter takes to orbit thesun," said study co-author Dick Manchester of the Commonwealth Scientificand Industrial Research Organization (CSIRO), Australia's national scienceagency.

Ifthe mass of Jupiter and its moons is correctly calculated, the timing errorsdisappear from the data set, the scientists said.

Theresearchers have been using this method to determine the masses of planets inour solar system. Such measurements could provide data needed for future spacemissions.

Thepulsar observations were recorded by CSIRO's Parkes radio telescope in easternAustralia, with additional data contributed by the Effelsberg telescope inGermany and the Arecibo telescope in Puerto Rico.

Theresearchers said they got their best measurements from Jupiter and its system, asthe pulsar technique is most accurate with more-massive planets.

"Themore a planet can draw the barycenter away from the sun, the easier it is tomeasure the mass," Champion told SPACE.com. "We're less accurate withMars and Mercury because they're far less massive. Mercury hardly moves thebarycenter at all."

Spacecraftwill continue to provide the most accurate measurements for individual planets,but the new pulsar technique will be ideal for calculating the mass of planetsnot being visited by spacecraft, researchers said. It is also helpful fordetermining the mass of entire systems ? the combination of planets and theirmoons.

Additionally,repeating the measurements will help to refine the current values and make themmore accurate.

?Ifastronomers observed a set of 20 pulsars over seven years, they would be ableto weigh Jupiter more accurately than spacecraft have, the scientists said. Thesame process for Saturn would take 13 years.

"Astronomersneed this accurate timing because they're usingpulsars to hunt for gravitational waves predicted by Einstein's general theory of relativity," said MichaelKramer, who leads the Fundamental Physics in Radio Astronomy research group atthe Max Planck Institute for Radio Astronomy. "Finding these waves dependson spotting minute changes in the timing of pulsar signals, and so all othersources of timing error must be accounted for, including the traces of solarsystem planets."

Theresearch team consisted of scientists from Australia, Germany, the United States,the United Kingdom and Canada. The study is detailed in a paper that has beenaccepted for publication in the Astrophysical Journal.