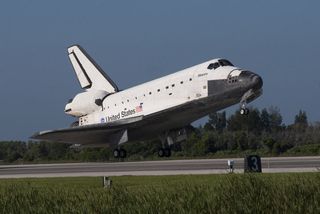 More than 1,300 space shuttle workers received layoff notices this week from United Space Alliance ? a NASA contractor that is cutting 15 percent of its 8,100-person workforceahead of the shuttle fleet's retirement next year.

Layoff notices were issued to 1,394 USA employees in all, company spokesperson Kari Fluegel told SPACE.com. ?The layoffs takeeffect Oct.? 1 and were announced earlier this month by USA officials.

?Our workforce has known for several yearsthat the SpaceShuttle Program has been scheduled to end, but layoffs are always difficultfor everyone involved,? said Virginia Barnes, USA president and chief executive,said in a July 6 statement. ?We are committed to making this transition assmooth as possible.?

The Houston-based UnitedSpace Alliance is a partnership between Boeing Co. and Lockheed Martin thathas operated the space shuttle fleet for NASA since 1995.

Fluegel said 902 layoff notices were issued to USAworkers in Florida, which is home to NASA's Kennedy Space Center in CapeCanaveral that serves as both launch site and home port for the agency's three shuttles.Another 478 layoffs were issued for Texas, which is home to NASA's shuttlemission operations, with 14 more in Alabama, where NASA's Marshall Space FlightCenter is based.

About one-third of those recieving layoffs in each division nominated themselves for the cutbacks, Fluegel said.

NASA's space shuttle fleet is set to retire next yearafter 30 years of launching astronauts into low-Earth orbit. The shuttles beganflying in 1981 and have flown on 132 missions so far.

Two finalshuttle missions are currently scheduled (in November and February,respectively) to complete the International Space Station, which has been underconstruction since 1998 by a consortium of 16 countries. Congress is discussingthe possible addition on a third and final shuttle mission. If approved, that extraflight would likely launch next summer, NASA officials have said.

Fluegel said that if the extra shuttle flight isapproved, it will not affect the impending Oct. 1 layoffs. But there could berepercussions for more layoffs ahead.

"This plan wouldn't be affected at all, but it wouldaffect the timing, obviously, of when we would do layoffs, and how we'd dolayoffs, next year," Fluegel said.

NASA is retiring its three space shuttles (Atlantis,Discovery and Endeavour) to make way for a new plan that aims to sendastronauts to an asteroid by 2025, and then on to Mars. That new plan replacesthe agency's previous Constellation program, which sought to return astronautsto the moon in the 2020s.

President Barack Obama proposed cancelling theConstellation program, which included new rockets and spacecraft to launchastronauts. That plan would set aside $6 billion over five years to support thedevelopment of new commercial spaceships that could ferry astronauts intospace.

Draft NASAauthorization bills under review in both the Senate and House of Representatives,however, would cut the amount for commercial crew services, if approved.

NASA's next space shuttle to fly will be Discovery, whichis slated to launch Nov. 1 to deliver a storage room and robot assistant calledRobonaut 2 to the $100 billion International Space Station.