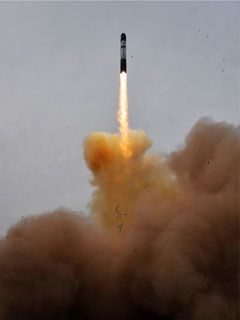 A Soviet-era Dnepr rocket blasted off from southern Russia on Tuesday, June 14, 2010, with a French spacecraft and a Swedish experiment.
(Image: © Kosmotras)

A Soviet-era ballistic missile blasted off from southern Russiaon Tuesday with a French spacecraft to observe the sun and a Swedish experimentto demonstrate orbital formation flying with two satellites.

The 111-foot-tall Dnepr rocket launchedfrom an underground silo at a space base near Yasny, Russia, a small communityin the Orenburg region in the southern part of the country.

The three-stage booster was expected to haul the twopayloads into sun-synchronous orbit 440 miles high and deploy the satelliteswithin 16 minutes of liftoff.

Controllers will establish communications with the Picardand Prisma payloads shortly after launch, confirming they are in the correctorbit and operating well after arriving in space.

Picard is commencing a two-year mission to watch the sunwith three instruments. Scientists hope the satellite will provide insightsinto the sun'svariability and its link to Earth.

The 315-pound spacecraft is based on a microsatelliteplatform developed by CNES, the French space agency.

CNES is also managing the Picard mission withthe help of Belgium, Switzerland and French research institutions. The cost ofthe mission is 70 million euros, or approximately $85 million at currentexchange rates, according to a CNES spokesperson.

The mission is named for Jean Picard, the French astronomerwho first accurately measured the sun's diameter in the 17th century.

Picard's 4.3-inch imaging telescope, called SODISM, willobtain ultra-precise measurements of the sun's diameter, shape and rotation.The telescope will also probe deep into the sun's interior to seek the sourceof variations in the solar irradiance, or changes in the radiant energyproduced by the sun.

French scientists say Picard will complement observations byNASA's Solar Dynamics Observatory, a satellite launched in February that is nowstudying the sun with a high-resolution telescope, a seismic imager and anultraviolet radiation monitor.

SDO and Picard use different methods in their observations,providing a check on each mission's results.

According to researchers, changes in solar activity canaffect the Earth's climate, ozone level, communications and satelliteapplications.

Picard's launch comes just as solar activity is increasingafter an extended phase of relative tranquility on the sun, a period known assolar minimum. The fortunate timing means Picard will observe the sun as moresolar storms develop and send plumes of radiation toward Earth.

The Dnepr rocket also launched the Prisma mission into spaceTuesday.

Consisting of two satellites, Prisma will attempt a daringdemonstration of new technologies for automated formation-flying and rendezvousof spacecraft in orbit.

"This choice of formation-flying was made because itwas an area nobody [has tried before], at least not with the precision that'sgoing to be shown with the Prisma satellites," said Christer Nilsson,Prisma program manager at the Swedish space agency.

Prisma's Mango and Tango spacecraft, bolted together for thelaunch, will separate about a month after launch.

Zooming through space at 17,000 mph, the satellites willtest autonomous rendezvous technology from Sweden, a GPS system from Germany, aradio frequency instrument from France, and a vison-based navigation sensorfrom Denmark.

Playing the role of the active satellite, Mango willrepeatedly approach and back away from Tango for up to ten months,demonstrating each of the technologies one-by-one.

Mango is a 331-pound cube-shaped craft about the size of akitchen stove. It will try to stay in lockstep with the smaller 88-pound Tangosatellite, which has roughly the dimensions of an average microwave.

"Prisma is really a Christmas tree of differentdemonstrations," said Staffan Persson, the Prisma project manager fromSwedish Space Corp. "Everybody should have something out of the mission asearly possible. There's sort of an early harvest strategy involved here, andthen we go to more and more advanced exercises."

Engineers plan to cap the mission with a rendezvous attemptto place the satellites just a meter, or about three feet, apart some time thisfall using the optical sensor from Denmark.

The larger Prisma satellite also features two experimentalthrusters burning green propellant based on ammonium dinitramide. The non-toxicfuel is more environmentally-friendly and efficient than hydrazine propellantused on most satellites.

Swedish Space Corp. built the satellites for the SwedishNational Space Board. The mission cost Sweden about $50 million, but thatfigure doesn't include contributions from European partners.

Our earlier feature story on thePrisma mission includes more details on the technologies it will test in space.