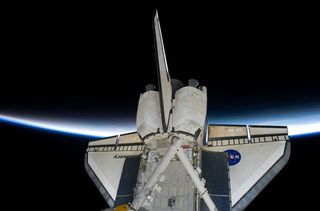 Intersecting the thin line of Earth's atmosphere, the space shuttle Discovery is featured in this image photographed by crewmember while it was docked with the International Space Station on April 13, 2010 during its STS-131 mission.

Space shuttle Discovery and its crew of seven astronauts are headed for a morning landing in Florida today, now that rain and fog have cleared up enough to allow their return to Earth.

Fog and rain delayed NASA's first attempt to land the shuttle at its Kennedy Space Center in Cape Canaveral, Fla., but conditions have improved greatly. Discovery is due to land at the space center — its home port and launch site — at 9:08 a.m. EDT (1308 GMT).

Mission Control radioed the good news to Discovery's crew and ordered the astronauts to fire their shuttle's rocket engines at 8:02 a.m. EDT (1202 GMT) in order to leave Earth orbit and begin the descent home.

Discovery is flying a rare re-entry and landing approach that will carry it over much of North America.

The shuttle should be visible (weather permitting) to observers on the ground as it streaks from the northwestern United States to the southeast, passing over parts of western Canada, Washington, Wyoming, Colorado, Kansas, Nebraska, Oklahoma, Arkansas, Mississippi, Alabama and Georgia and then finally into Florida for a landing at Cape Canaveral. The last time a shuttle made such an approach was in 2007.

NASA typically tries to have space shuttles re-enter from the southwest — an approach that is mostly over the southern Pacific Ocean, parts of Central America and the Gulf of Mexico — to avoid flying over populated areas since the tragic loss of the shuttle Columbia, which broke apart over Texas during re-entry.

Discovery is returning home to wrap up a 15-day mission to the International Space Station, where the astronauts delivered nearly 8 tons of supplies, science equipment and spare parts, and performed three maintenance spacewalks. The shuttle launched into space on April 5.

This mission is the second-to-last mission for Discovery, which is NASA's oldest space shuttle. The spaceflight is also one of NASA's few remaining shuttle missions before the space plane fleet is retired in the September.

The next to fly is shuttle Atlantis, which is due to roll out to its seaside launch pad at the Kennedy Space Center tonight. That launch pad trek — the last planned one for Atlantis — was also delayed a day because of bad weather.