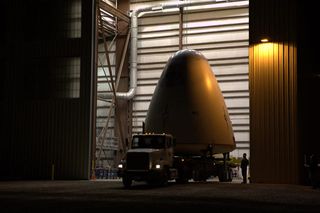 Anticipation is on the rise for a new crop of commercial suborbital spaceships that can serve the scientific and educational market. These reusable rocket-propelled vessels are expected to offer quick, routine and affordable access to the edge of space, along with the capability to carry research and educational crew members.

There are a number of "cash and carry" suborbital craft under development by such groups as: Armadillo Aerospace, Blue Origin, Masten Space Systems, Virgin Galactic, as well as XCOR Aerospace.

But some 250 scientists, educators and the makers of suborbital rocket vehicles met last month in Boulder, Colorado to discuss the tantalizing science opportunities offered when suborbital trips are routine during the Next-Generation Suborbital Researchers Conference.

The attraction for investigators at the meeting was to gauge use of suborbital craft to carry out a variety of high-altitude science studies, including access to three to four minutes of microgravity for experimentation, discovery and testing.

Suborbital flights up to 62 miles (100 km) above Earth could serve numbers of disciplines, such as astronomy, the life sciences, microgravity physics, or to plumb a little-known atmospheric region dubbed "the ignorosphere."

Lori Garver, NASA's deputy administrator, said that the government is keen on stimulating the suborbital market, seeing it as bridge building to orbital flight.

To this end, Garver noted that the space agency is seeking Congressional approval in their fiscal year 2011 budget for $75 million in planned funding over five years for NASA's Commercial Reusable Suborbital Research (CRuSR) program.

"Suborbital puts us on a sustainable, step-by-step path to building an industry that evolves to low cost access to orbit," Garver said. "We're really on the cusp of an exciting new capability for our country and for our economy."

Charles Miller, senior advisor for commercial space and program executive for CRuSR at NASA Headquarters, Washington, D.C. told SPACE.com: "Industry will pick the point design. Some of them will succeed, some of them will fail. Over time it's vastly superior at accelerating innovation in the nation."

Miller said the backing by NASA's CRuSR program is akin to the government becoming an anchor tenant customer for air mail delivery in the 1920s. That relationship, he said, helped the industry close their business case and raise private capital.

"We see the same thing happening in commercial suborbital research," Miller continued. "NASA is going to be an early customer," with other federal agencies, universities and the private industry becoming customers too, he suggested.

Flight rates: still to be proven

Yet to be demonstrated is the hoped-for flight rates of suborbital vehicles. Quick turnaround of these craft is central to realizing the profit-making potential of over-and-over sojourns by piloted and unpiloted vessels to the suborbital heights.

As pointed out in a handout from Masten Space Systems of Mojave, California: "Reusable Launch Vehicles — Just Gas 'Em Up and Go!" The company said it intends to begin precursor flights later this year, flying an unpiloted reusable craft up to 22 miles (36 km) in a beta testing program. The California-based company won $1 million last October in a NASA contest to build reusable rocket-powered craft designed to mimic lunar landers.

From the scientific perspective, for the story to close for science, flight rates have to be high, said Alan Stern, chair of the scientific organizing committee for the conference and associate vice president of the Southwest Research Institute's Space Science and Engineering Division in Boulder.

Stern also chairs the Commercial Spaceflight Federation's Suborbital Applications Researchers Group and is a former NASA associate administrator for science. He called attention to the fact that passenger suborbital flights will be risky business.

"Risk is not new to scientists and educators," Stern added. "Scientists risk their lives going to the bottom of the ocean, to the tops of mountains, to the poles of the Earth. Scientists have lost their lives in space exploration, as have educators," he said, noting the tragic loss in 1986 of the Challenger shuttle crew that included Christa McAuliffe, America's selected Teacher in Space.

"As much as I wish it were, safety is not an absolute," Nield pointed out. "Misfortune will always be an uninvited possibility whenever a rocket launches."

Safety is a mindset — a professional tension, Nield counseled, and for all the people involved in providing a rocket trip, they must be constantly on alert. They have to be determined to "get it right this time, next time, all the time," he said.

The initiative of roaring skyward to the edge of space on repeat voyages was spotlighted in a recent report — "Revitalizing NASA's Suborbital Program: Advancing Science, Driving Innovation, and Developing Workforce" — issued late last month by the prestigious National Research Council.

An NRC recommendation from a blue ribbon committee of experts observes: "NASA should continue to monitor commercial suborbital space developments. Whereas the commercial developers stated to the committee that they do not need NASA funding to meet their business objectives, this entrepreneurial approach offers the potential for a range of opportunities for low-cost quick-access to space that may benefit NASA as well as other federal agencies."

One scientific pursuit that seems a perfect match for suborbital vehicles is ultra-high upper atmospheric research, said Pete Worden, director of NASA's Ames Research Center, Moffett Field, California. That area is too high for balloons, too low for satellites and too expensive for repeat sounding rocket visits, he said.

Very little information exists on this upper atmosphere region, often called the "ignorosphere," Worden noted. Suborbital vehicles rocketing from various spaceports around the globe could sample this region, he said.

"There's beginning to be evidence that there is some very complicated coupling mechanisms, particularly in changes of solar ultraviolet flux on the upper atmosphere and climate changes on the ground. We don't know how that works," Worden said.

Add to the research mix that life may well exist in that region, Worden pointed out. "If you have life in these upper regions of Earth's atmosphere, that begins to tell us where we can look in other places," he said, such as life in the upper atmosphere of Venus or perhaps Mars.

"These are the kinds of things that add up to significant research that's clearly world-class," Worden concluded.