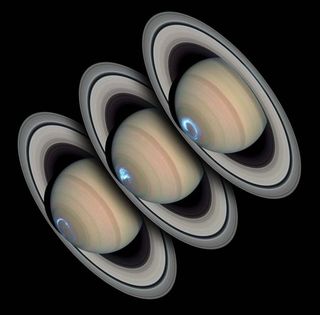 Hubble Space Telescope images of Saturn and its polar auroral emissions on Jan. 24, 26, and 28 in 2004. The images combine ultraviolet images of the south polar region with visible wavelength images of the planet and rings. Credit Z. Levay and J. Clarke.

When a large storm of charged particles leapt from the Sun in January 2004, scientists jumped at the chance to observe what would happen when the tempest reached Saturn. The storm kicked up bright lights above the planet and created radio emissions that sound like an eerie, hissing heartbeat.

The effects were not unexpected. Solar storms charge the upper atmosphere of Earth in a similar manner, creating auroral displays in the polar regions sometimes called the Northern Lights or Southern Lights. Jupiter has aurora too.

Researchers expected Saturn's aurora to have characteristics in between the lights of Earth and Jupiter. Instead, they found some surprises.

The auroras were imaged in ultraviolet light over several weeks by the Hubble Space Telescope. The Cassini spacecraft, still en route to the planet at the time, recorded radio emissions, which fluctuated in lockstep with the intensity of the aurora.

"We had expected that this might be the case, based on our understanding of auroral radio signals from Earth's auroras, but this is the first time we've been able to compare Saturn's radio emissions with detailed images of the aurora," said William Kurth of the University of Iowa. "This is important to our on-going Cassini studies because this association allows us to have some idea of what the aurora are doing throughout the mission from our continuous radio observations."

Audio files of Saturn's sounds, including the heartbeat of its rotation, are available here.

Auroral displays are the result of charged solar particles interacting with a planet's magnetic field. Electrons are accelerated to high speeds, and race toward the planet along magnetic field lines, which converge at the poles. The electrons stimulate air atoms and molecules, making them glow.

Among the differences in Saturn's auroral displays:

The unexpected behaviors suggests Saturn's auroras are driven in some unknown manner by both the solar wind of charged particles and the Sun's influential magnetic field, which because of the greater distance would interact differently with Saturn, scientists said. But more research is needed to learn what creates the unique features in Saturn's Southern Lights.

The results are detailed in three papers in the Feb. 17 issue of the journal Nature.