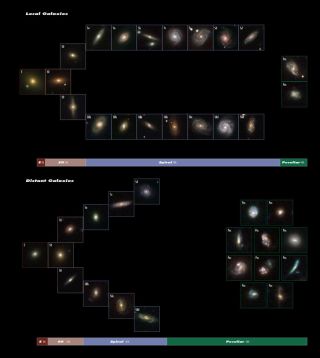 The Hubble sequence six billion years ago was very different from the one astronomers see today. The two sections show how many more peculiar shaped galaxies (marked Pec) are seen among distant galaxies, as opposed to among local galaxies. The data organisation follows the Hubble tuning-fork classification scheme invented in 1926 by Edwin Hubble. The top image represents the current ï¿½ or local ï¿½ universe. The bottom image represents the make up of the distant galaxies (six billion years ago), showing a much larger fraction of peculiar galaxies. This implies that many of the peculiar galaxies ultimately become large spirals. These images were created from data that are part of large sky surveys undertaken by the NASA/ESA Hubble Space Telescope and the 2.5 m-diameter telescope at Apache Point Observatory, New Mexico, US (Sloan Digital Sky Survey).
(Image: © NASA, ESA, Sloan Digital Sky Survey, R. Delgado-Serrano and F. Hammer (Observatoire de Paris))

A European probe made its closest-ever swing by Mars' moonPhobos Wednesday on a quest to learn more about the inner structure of the mysteriousMartian satellite.

The European Space Agency (ESA)'s Mars Express spacecraftflew in about 42 miles (67 km) above the rocky moon's surface. The pass was oneof 12 scheduled flybys of Phobos,each with its own scientific objective.

"I'm very happy that it's working so well," GerhardSchwehm, head of ESA's Solar System Science Operations Division, said after themaneuver. "This close encounter by MarsExpress has been a great chance to learn more about the inner structure ofPhobos."

Phobos is the larger of Mars' two diminutive moons (theother is Deimos). With a diameter only about 14 miles (22 km) wide, Phobosis not massive enough to have rounded into a sphere when it formed. Rather, itis shaped irregularly, more like a lumpy asteroid than a moon.

The goal of this pass was to study the mass distribution andgravitational field of this body. So any kind of movement by the spacecraft,even the miniscule changes caused by using its cameras to snap pictures, couldthrow the measurements off.

"This is a unique experiment and requires thespacecraft to be entirely passive, so that the only deviations to its motionare produced by the gravitational field of Phobos (which for Mars Express isjust one-billionth the strength of Earth?s gravity at the surface of ourplanet)," wrote ESA spokesperson Stuart Clark on the Mars Express Blog.

Sadly, that means no pretty pictures from this flyby.