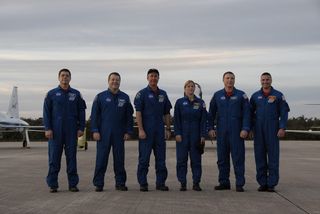 NASA has set a firm early February launch date for the space shuttle Endeavour to deliver a brand-new room and observation portal to the International Space Station.

The decision, announced Wednesday, official targets Endeavour for a planned 4:39 a.m. EST (0939 GMT) blastoff on Feb. 7 from NASA's Kennedy Space Center in Florida. The predawn liftoff is expected to be NASA's last ever space shuttle launch in darkness.

The Tranquility module is a 24-foot (7.3-meter) cylinder that is nearly 15 feet (4.5 meters) wide and weighs about 40,000 pounds (18,143 kg). It will eventually serve as the home for the station's robotic arm controls, life support systems and exercise gear. One of the module's many connection ports will be occupied by the Cupola, a seven-window addition that promises to give astronauts a sweeping, panoramic view of Earth, space and visiting spacecraft, NASA officials said.

Endeavour astronauts will perform three spacewalks during the mission. Their shuttle will also be hauling spare parts for the space station's broken urine and water recycling system, mission managers said.

NASA will have several chances to launch Endeavour ahead of an unmanned rocket slated to loft the space agency's new Solar Dynamics Observatory to study the sun. That solar probe is also due to lift off in early February, mission managers said.

Endeavour's flight will be the 130th shuttle flight since NASA began launching the winged, reusable space planes in April 1981. The upcoming night launch is the first of NASA's five final shuttle missions planned in 2010 before the orbiter fleet is retired later this fall.