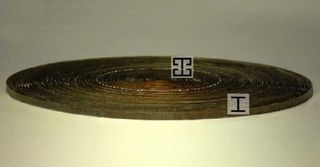 Photograph of an artificial electromagnetic black hole created in a lab, made out of 60 concentric layers of circuit board.
(Image: © Cheng/Cui/Arxiv)

Researchers have simulated a mini black hole in the lab,though luckily not the kind that could swallow up the Earth.

This pseudoblack hole captures only light, not mass.

"The device we created is not a realblack hole, but only a device to mimic the black-hole effect," saidresearcher Tie Jun Cui, a professor at Southeast University in China. "Actually, the device can trap and absorb the electromagnetic waves which hitthe device. Hence we call it as the Electromagnetic Black Hole."

Cui's creation, first reported by WiredScience, is a far cry from the average cosmic variety of black hole, whichis an object so dense it absorbs any mass or light that comes within acertain radius of it. The mini black hole in the lab is not nearly sopowerful, though it can simulate a black hole's effects when it comes toswallowing light, also known as electromagnetic radiation.

Cui and colleague Qiang Cheng built their ersatz black holeout of circuit board, by linking 60 concentric circular layers of board etchedwith copper patterns that interact with electromagnetic waves. The result is adevice that absorbs all incoming light in the microwave range of the spectrum.

Another facet of a real black hole that the simulated onedoes not share - thankfully - is the ability to eat up the Earth: Any true blackhole of considerable mass createdin a lab could pose a serious risk.

"The device does not have any danger," Cuireassured.

The scientists suggest their invention might be used toharvest energy from the sun by absorbing light rays.