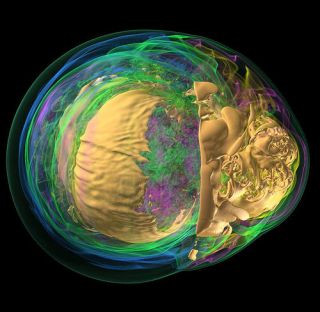 This astrophysics simulation seeks to discover the mechanism behind core-collapse supernovae, or the violent death of short-lived, massive stars. The image shows entropy values in the core of the supernova, different colors and transparencies assigned to different values of entropy. By selectively adjusting the color and transparency, the scientist can peel away outer layers and see values in the interior of the 3-D volume.
(Image: © Hongfeng Yu)

A new viewof supernovas ? the spectacular explosions of dying stars ? has come not from atelescope, but from a powerful supercomputer simulation.

Performinga single run of a current model of the explosion of a star on a home computerwould be next to impossible ? it would take more than three years just todownload the data. So scientists instead use supercomputers,which can handle processing quadrillions of data points at a time.

"Onthe scale that we?re working, creating a movie would take a very long time onyour laptop ? just rotating the image one degree could take days," saidMark Hereld, who leads the visualization and analysis efforts at the U.S.Department of Energy's Argonne National Laboratory.

The modelsrun on these computers can generate visualizations of everything from supernovasto protein structures.But even with the speed supercomputersprovide, the complex models are quickly overwhelming current computingcapabilities.

Scientistsat Argonne are exploring other ways to speed up the process, using a techniquecalled software-based parallel volume rendering.

Volumerendering is a technique that can be used to make sense of the billions of tinypoints of data collected from an X-ray, MRI, or a researcher?s simulation. Theeffort could particularly help in manipulating images and creating movies fromthem.

Thetechniques the researchers are working on use parallel computing ? processingdata in multiple computing cores (160,000 cores for Argonne's computer). Thedata is then usually sent to graphics processors (GPUs) to make images, butbecause most GPUs are developed in the video gaming industry, they're notalways well suited for scientific tasks. It also takes a lot of computing powerto move all that data over.

Argonne researchers wanted to know if theycould improve performance by skipping the transfer to the GPUs and insteadperforming the visualizations right there on the supercomputer. They tested thetechnique on a set of astrophysics data and found that they could indeedincrease the efficiency of the operation.

"Wewere able to scale up to large problem sizes of over 80 billion voxels per timestep and generated images up to 16 megapixels," said Tom Peterka, apostdoctoral researcher at Argonne.

This newvisualization method could enhance research in a wide variety of disciplines,Hereld said.

"Inastrophysics, studying how starsburn and explode pulls together all kinds of physics: hydrodynamics,gravitational physics, nuclear chemistry and energy transport," he said."Other models study the migration of dangerous pollutants through complexstructures in the soil, to see where they?re likely to end up; or combustion incars and manufacturing plants?where fuel is consumed and whether it'sefficient."

"Thosekinds of problems often lead to questions that are very complicated to posemathematically," Hereld said. "But when you can simply watch a starexplode through visualization of the simulation, you can gain insight that?snot available any other way."