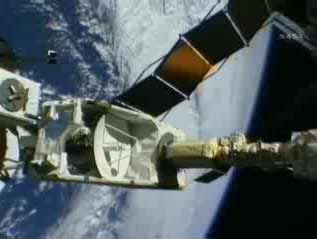 The inter-orbit communications system is seen by a camera outside the International Space Station as it is moved to an exterior porch on the station's Kibo lab using a Japanese robotic arm on July 23, 2009 during the STS-127 mission.
(Image: © NASA TV.)

It was abanner day for Japan at the International Space Station Thursday, whereastronauts successfully installed a set of experiments on a brand new porchon the end of the outpost?s massive Japanese laboratory.

Astronautsused a Japanese robotic arm to move two experiments and a sophisticatedcommunications system from a carrier platform to the station?s new porch, whichextends out from Japan?s $1billion Kibo lab at the orbital outpost. The robotic arm, carrier platformand porch were all built by the Japan Aerospace Exploration Agency (JAXA) forthe station.

?It allworked great and we were just happy to be part of this team,? said JAXAastronaut Koichi Wakata, who helped drive the Japanese robotic arm Thursday.Wakata, Japan?s first long-duration space resident, has lived aboard thestation since March and will return home on Endeavour next week.

Japan?sKibo lab porch is an external platform about 18 feet (5.6 meters) wide, 16feet (5 meters) high and 13 feet (4 meters) long. It can hold up to 10 differentexperiments at a time and has a small airlock and two windows so astronauts candeploy or move payloads as needed. The porch is the last piece of the station?sgiant Kibo lab, which also includes a largemain module the size of a tour bus and a smaller storage attic.

The threepayloads moved to the porch Thursday included: an inter-orbit communicationssystem for beaming down images and video from the station, an experiment tostudy the effect of the station's space environment on electronics and devices,and an X-ray observatory to scan the night sky.

Thecommunications system uses a dish antenna to beam images, data and voicecommunications to Earth by relaying them from the station to a Japanesesatellite that then sends it to Japan's Kibo mission control center at theTsukuba Space Center.

The finalpayload is the X-ray observatory, called MAXI. It has two X-ray detectors thatwill be used to scan the sky once every 90 minutes to study emissions fromdistant astronomical objects.

?We arevery, very happy to see that all the payloads were successfully transferred,?JAXA astronaut Akihiko Horsehide radioed the station from Kibo?s Japanesemission control center in Tsukuba, Japan.

Yokoyamasaid the new experiments and communications system were doing well after theirinstallation. They will undergo a series of tests after Endeavour leaves thestation next week and will likely begin full science observations by earlyfall, he added.

Endeavour?sseven-astronaut crew is in the middle of a 16-day mission to deliver thestation?s Japanese porch and a new crewmember. The shuttle is scheduled toleave the station next week and land July 31.

The shuttleastronauts are now gearing up for their mission?s fourth spacewalk on Friday, a7 1/2-hour excursion to replace four old solar array batteries.