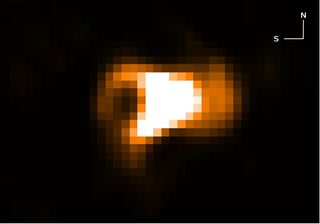 An HST ACS image of RS Oph 155 days after outburst, clearly showing a double-lobed structure with one lobe apparently bigger than the other. North is up and east to the left. At a distance of around 5,000 light years, the structure about 600 times the distance from the Earth to the Sun across and expanding at around 3,000 km per second.
(Image: © NASA/HST/Valerio Ribeiro)

A thermonuclear explosion on a dead star has resulted inan expanding space bubble shaped like a peanut.

The unusualsight arose from an unstable pairing of two aged stars: a white dwarf and ared giant in the constellation of Ophiuchus, known collectively as RS Oph.Astronomers imaged the double-lobed peanut structure's material expandingoutwards at between 621 and 1,864 miles per second (1,000 and 3,000 kps).

"There are some astronomers who believe systems likethis will ultimately explodeas supernovae," said Valerio Ribeiro, an astrophysics researcher atLiverpool John Moores University in the UK.

Energy output from RS Oph reaches 100,000 times that ofthe sun during such events, and the eruption ejects an amount of materialequivalent to Earth's mass  at hundreds of miles per second.

The red giant is a bloated, late-stage star whose daysare numbered. Researchers point to the redgiant's wind as the culprit behind the unusual shaping of the expandingnebula. That wind usually forces surrounding material to gather near the stars'orbital plane and leaves less near the poles.

When an outburst occurs, high-speed material from theeruption hits the dense gas in the orbital plane and slows down, but itcontinues moving outward at high speed in the polar areas to form thedouble-lobed peanut shape.

The research was to be presented April 22 at the EuropeanWeek of Astronomy and Space Science conference at the University ofHertfordshire.