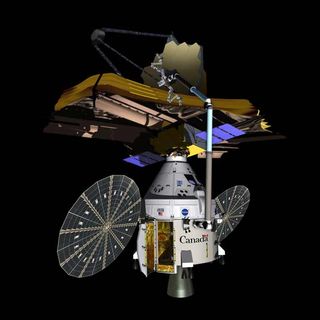 The as-yet unbuilt arm could be offered to the U.S. spaceagency in exchange for flying a Canadian astronaut on an Orionmission, according to officials with MacDonald, Dettwiler and Associates(MDA) of Richmond, British Columbia.

Steve Oldham, MDA's vice president in charge of robotics,said although the contract is small from a financial point of view, it has thepotential to lay the groundwork for lucrative future programs. ?We're hopingit's the thin edge of a significant wedge as Canada moves more towards thenext generation of its space exploration program,? he told Space Newsin a Feb. 19 interview.

The studies are intended to demonstrate what Canadian industrycould hope to achieve in the areas of next-generation robotics for both rovermissions and on-orbit servicing. While NASA is developing Orion first andforemost to provide crew transportation for Moon missions and jaunts to theinternational space station, the agency also has discussed other uses forOrion, including the servicing of future space telescopes.

Most of the technologies that are being looked at fordevelopment are ones that already have been discussed between the CSA and NASA,Oldham said. ?For example, on Orion we've had meetings with NASA where we'vesat down with them and said, ?What kind of robotic capability would [you] wanton Orion' and they've said we want A, B and C,? Oldham explained. ?So that'swhat we're developing here. This is a part of a coordinated internationalactivity.?

The research work into next-generation robot technologybuilds on the strengths of Canadian industry, he added. Canada has been workingin the area of orbital robotics for 25 years, with MDA producing robotic armsfor the space shuttle and the international space station.

"One of the studies that we've got funding for is tolook at the types of technology, how you can accommodate it [and] whatrequirements could be met on board Orion by a small Canadarm," Oldhamsaid.

The other technologies being examined relate to rovermobility for the surface of the Moon or Mars. Oldham said the studies representpotential contributions that Canada could use to barter for astronaut time oninternational space exploration missions such as future Orion flights. Thestudies will be produced over the next six to 12 months, he added.

The Canadian government announced last month that it wouldprovide 110 million Canadian dollars in new funding to the CSA for thedevelopment of new-generation space robotic and rover technologies. SteveMacLean, head of the Canadian Space Agency, said in a recent interview with SpaceNews that such work would build on the expertise developed under the Canadarmand Dextreprograms, although at this point the aim is to create terrestrialprototypes, not actual spaceflight hardware.

The proposed work also would include developingsubcomponents of space robotics vehicles. Julie Simard, spokeswoman for theCanadian Space Agency in Saint-Hubert, Quebec, said there is no plan at thispoint to provide a robotic arm to Orion in exchange for having a Canadianastronaut on board the mission.

NASA spokeswoman Kylie Clem also said there are no currentplans to include a robotic arm on Orion. She noted, however, that NASA hasappreciated the contributions the Canadian Space Agency has made to shuttle andthe International Space Station programs. "We expect some sort ofcooperation in the future but not at this point on Orion," she said.

But Anthony Salloum, a space adviser for the RideauInstitute think tank in Ottawa, said that it would make sense for the CSA toeventually offer a new-generation robotic arm for Orion or other future U.S.manned spacecraft in exchange for flight time for Canadian astronauts.

"Canada used its contribution of robotic arms for theshuttle and the international space station in terms of a swap, if you will, ofCanadian technology for the placing of Canadian astronauts on thosemissions," said Salloum. "I think MDA is sending a clear message thatif the Canadian government hasn't yet thought about such an arrangement tosecure a place on an Orion mission, it should consider it now."

Salloum noted that just last year the CSA launched arecruitment program for a new generation of Canadian astronauts. It is stilldetermining who among those applicants will be future astronauts.