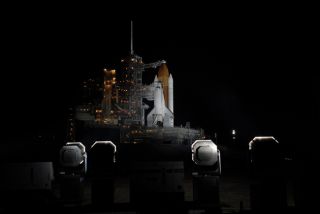 CAPE CANAVERAL, Fla. - NASA engineers are trying to makeup for lost time as they complete repairs on the space shuttle Discovery toprepare it to launch tomorrow.

Technicians fell up to four hours behind schedule today whilereplacing a suspect connector between the shuttle's external fuel tank and a hydrogenvent line, believed to be the source of a potentiallydangerous leak that prevented the spacecraft?s Wednesday launch attempt.

Mission managers said today they expect the crews will beable to finish the fix in time for Discovery's plannedliftoff attempt tomorrow at 7:43 p.m. EDT (2343 GMT) from the seaside LaunchPad 39A here at NASA?s Kennedy Space Center.

"We're good to go tomorrow, and we're lookingforward to getting the count back running," said Mike Moses, who leads Discovery'smission management team, during a briefing here.

The weather outlook for tomorrow is encouraging, with an80 percent chance of favorable conditions for launch, said shuttle weatherofficer Kathy Winters. A possible low cloud ceiling represents the main threat.

Discovery is set for a 13-day mission to theInternational Space Station, including three spacewalks to install the lastsegment of the station's backbone-like truss and a new set of solar panels. TheSTS-119 mission will also drop off Japanese astronaut Koichi Wakata for asix-month stay at the space station, where he is due to replace NASA astronautSandra Magnus. Wakata will be Japan's first long-duration astronaut.

If Discovery misses its chance to lift off on Sunday,then launching on Monday or Tuesday would require shortening the mission evenmore. If the shuttle cannot launch by Tuesday, NASA will stand down until April7, after the Soyuz flight, to avoid overlap between the two vehicles at thespace station.

Engineers have not yet determined the root cause of theleak of flammable hydrogen gas, which poses an explosion risk so close to theshuttle. They are wrapping up work to replace a segment of the vent line to stopoff the leak. The vent line helps keep the liquid hydrogen reservoir inDiscovery?s external fuel tank adequately pressurized by siphoning excessgaseous hydrogen away as the super-chilled propellant boils off.

So far, tests suggest the new seal is holding, but NASAwon't know for sure until the seal is subjected to the super-cold temperaturesachieved when loading the fuel tank with cryogenic liquid hydrogen propellantbefore launch. If the leak persists, the launch will be scrubbed again untilengineers can come up with a better solution.

"We like to know root cause for problems. I'm alittle surprised? that we didn't find something more obvious," saidshuttle launch director Mike Leinbach. "But from a launch safety, a crewsafety perspective, we are fine."

If Discovery cannot launch tomorrow, NASA can try againon Monday and Tuesday, though the weather looks increasingly worrisome witheach passing day. The current forecast predicts a 70 percent chance of goodconditions on Monday, but drops to a 40 percent chance on Tuesday.

In the meantime, Discovery'sseven-astronaut crew has been performing some final training exercises andresting up for their launch.

"The crew's in good shape," Moses said."They've been keeping themselves busy doing some training. Hopefully theyare going to take it easy and be ready to load into the ship tomorrow."