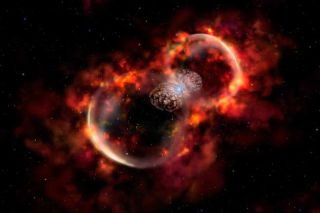 Artist's conception of the fast blast wave from Eta Carinae's 1843 eruption, which today has caught up with a slow-moving shell ejected in a previous outburst about 1,000 years ago, producing a bright fireworks display that heats the older shell and makes it emit X-rays (orange). The well-known two-lobed "Homunculus" nebula, a slow-moving shell of gas and dust also produced in the 1843 eruption, is shown closer to the star, which is a hot blue supergiant.
(Image: © Gemini Observatory, Lynette Cook)

A spectacular nearby star explosion observed in 1843 is now thought to be a previously unknown type of explosion that leaves stars intact.

Eta Carinae is a well studied energetic star, some 7,500 light-years away and within our Milky Way Galaxy. It is more than 100 times as massive as our sun, and it's hot and incredibly bright.

In cosmic terms, this unpredictable giant is considered to be in our backyard.

Visible from the Southern Hemisphere, Eta Carinae brightened incredibly in 1843 (the date is sometimes put at 1841), and astronomers in recent decades have photographed and studied the resulting cloud of gas and dust, known as the Homunculus Nebula, that billows away from the star. A farther-out faint shell of debris from an earlier explosion is also visible, probably dating from around 1,000 years ago.

"Looking at other galaxies, astronomers have seen stars like Eta Carinae that get brighter, but not quite as bright as a real supernova," said Nathan Smith of the University of California, Berkeley. "We don't know what they are. It's an enduring mystery as to what can brighten a star that much without destroying it completely."

Smith now proposes that the 1843 event was a true explosion that produced a fast blast wave similar to, but less energetic than, a real supernova.

Eta Carinae is thought to be related to a class of faint stellar explosions in other galaxies found in recent years, mysterious objects some astronomers call "supernova imposters." Smith told SPACE.com that the new findings suggest this class of objects may represent a different kind of explosion than had been known before.

Having a nearby example of these far-out stars could help astronomers figure out what's going on.

"There is a class of stellar explosions going off in other galaxies for which we still don't know the cause, but Eta Carinae is the prototype," Smith said today.

The debris in the Homunculus Nebula, from the 1843 event, is moving away from the central star (and a companion star discovered in 2005) at about 1.5 million mph (650 kps). That much was known.

Using the Gemini South telescope in Chile and a telescope at the Cerro Tololo Inter-American Observatory, Smith discovered previously unseen filaments of gas moving five times that speed and catching up with the outer shell, the one ejected 1,000 years ago.

The new picture challenges current theories of what happened in 1843.

Rather than a surface eruption, as has been suspected, Smith thinks a true explosion occurred deep inside the star in 1843, propelling debris into space.

"It takes a new mechanism to cause explosions like this," he said.

If Smith is right, Eta Carinae's activity mirrors the supernova imposters seen in other galaxies.

The study, funded by NASA and the National Science Foundation, is detailed in the Sept. 11 issue of the journal Nature.

Smith speculates that periodic explosions inside massive stars like Eta Carinae are a way to shed mass along the path to death.

"These explosions may be the primary way by which massive stars can shed their outer hydrogen layers before they die," Smith said. "If Eta Carinae is able to shed 10 solar masses every thousand years or so, that's an efficient mechanism for peeling off a large fraction of the star."

But he said it is still unclear if supernova imposters are scaled-down versions of supernovas, or perhaps failed supernovas, or maybe supernova precursor events, or if they are entirely different kinds of explosions. Whatever, much remains to be learned about the fates of very massive stars. Other researchers have said Eta Carinae is destined to explode in a full-blown supernova eventually.

"This could be an important clue for understanding the last violent phases in the lives of massive stars," he said. For the record: Smith says Eta Carinae is probably too far away to pose any threat to Earth.