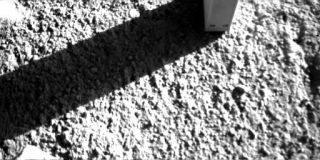 NASA's Phoenix Mars Lander inserted the four needles of its thermal and conductivity probe into Martian soil during the 98th Martian day, or sol, of the mission and left it in place until Sol 99 (Sept. 4, 2008). The Robotic Arm Camera on Phoenix took this image on the morning of Sol 99 while the probe's needles were in the ground. The science team informally named this soil target "Gandalf."
(Image: © NASA/JPL-Caltech/University of Arizona/Max Planck Institute)

New data from Mars' surface is puzzling NASA scientists: A fork-like probe on the Phoenix Mars Lander has sensed changes in humidity in the Martian air, but finds the dirt below perplexingly dry.

The measurements, the latest of which were taken over the last few days, indicate that water vapor is settling on or in the Martian dirt then being released back into the air on a daily cycle. So mission scientists have expected to find water molecules sticking to the Martian surface.

"If you have water vapor in the air, every surface exposed to that air will have water molecules adhere to it that are somewhat mobile, even at temperatures well below freezing," said Aaron Zent of the NASA Ames Research Center in Moffett Field, Calif., and the lead scientist for Phoenix's thermal and electroconductivity probe, which is making the humidity measurements.

Phoenix's mission on the red planet, which began after a May 25 landing there, is all about the tantalizing search for Martian water. The lander has already confirmed the presence of a subsurface layer of water ice, first detected in 2002 by NASA's Mars Odyssey orbiter, which is still circling the planet.

The Phoenix spacecraft is searching for clues that this layer was once liquid — a sign of Mars' past potential habitability. Phoenix is also trying to characterize the current behavior and cycling of water on Mars.

"Phoenix has other tools to find clues about whether water ice at the site has melted in the past, such as identifying minerals in the soil and observing soil particles with microscopes," said Phoenix project scientist Leslie Tampari of NASA's Jet Propulsion Laboratory in Pasadena, Calif. But, she added, "theconductivity probe is the main tool for checking for present-day soil moisture."

Mission scientists have several reasons to think that the water vapor detected in the Martian air should be present as a thin layer of moisture on the ground.

One is that in similar areas of below-freezing permafrost on Earth, a thin layer of unfrozen water is detected. One of the goals in sending the conductivity probe aboard Phoenix was to see if a similar thin film of moisture was present in the Arctic plains of Mars, where the spacecraft landed.

Another is the probe's measurements of relative humidity in the air on Mars.

"The relative humidity transitions from near zero to near 100 percent with every day-night cycle, which suggests there's a lot of moisture moving in and out of the soil," Zent said.

The discovery of the water ice layer and the apparent sublimation (or transition directly into the gas phase) of ice samples gathered in Phoenix's scoop are two more signs that moisture should be collecting on the surface dirt.

But so far, the four insertions of the lander's probe, the most recent of which occurred on Wednesday and Thursday, haven't turned up any water.

"All the measurements we've made so far are consistent with extremely dry soil," Zent said. "There are no indications of thin films of moisture, and this is puzzling."

The probe can detect water in the dirt by gauging how electricity moves through the surface between the four needles of the probe. The instrument can detect films of water barely more than one molecule thick.

Despite the failure to find a thin film so far, the Phoenix team isn't giving up. They are planning a variation of the insertion experiment that will involve scooping away a bit of dirt before inserting the probe to reach closer to the subsurface ice layer.

"There should be the same amount of unfrozen water attached to the surface of soil particles above the ice," Zent said. "It may be too little to detect, but we haven't finished looking yet."