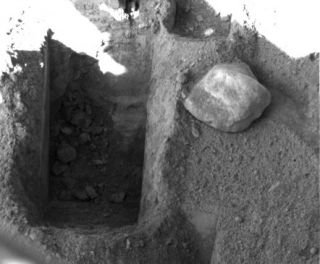 The lander's Surface Stereo Imager took this picture of Stone Soup trench on Sol 88 after the day's digging. Stone Soup is toward the left, or west, end of the robotic arm's work area on the north side of the lander.
(Image: © NASA/JPL-Caltech/University of Arizona/Texas A&M University)

For its next trick, NASA's Phoenix Mars Lander will dig a trench in the Martian surface three times deeper than any it has dug so far, as it completes its original three month-mission and embarks upon its extended mission.

Today marked the last day of the 90-sol (1 sol is one Martian day) primary mission since the spacecraft landed on Mars on May 25. Phoenix will continue its mission through the end of September, as NASA announced in July.

"As we near what we originally expected to be the full length of the mission, we are all thrilled with how well the mission is going," said Phoenix project manager Barry Goldstein of NASA's Jet Propulsion Laboratory in Pasadena, Calif.

Phoenix's main task for Sol 90 is to scoop up a sample of dirt from the bottom of a trench called Stone Soup, which is about 7 inches (18 centimeters) deep. This may not seem all that deep, but it is the furthest into the Martian surface that Phoenix has penetrated so far. On a later day, Phoenix's robotic arm will sprinkle some of the dirt from the sample into the third of four cells in the lander's wet chemistry lab.

"In the first two cells we analyzed samples from the surface and the ice interface, and the results look similar. Our objective for Cell 3 is to use it as an exploratory cell to look at something that might be different," said JPL's Michael Hecht, lead scientist for Phoenix's Microscopy, Electrochemistry and Conductivity Analyzer (MECA), which houses the wet chemistry lab. "The appeal of Stone Soup is that this deep area may collect and concentrate different kinds of materials."

MECA's wet chemistry lab dissolves samples in water brought from Earth and looks for soluble minerals that might be in the Martian dirt.

Stone Soup lies in a trough between two of the polygonal hummocks (or mounds) that characterize the plains of the Martian arctic where Phoenix landed. While Phoenix hit the subsurface layer of rock-hard water ice just 2 inches (5 centimeters) beneath the ground in the center of one of the hummocks, it has yet to hit the icy layer in the trough.

"The trough between polygons is sort of a trap where things can accumulate," Hecht said. "Over a long timescale, there may even be circulation of material sinking at the margins and rising at the center."

The Stone Soup sample was one of two sites scientists were considered for the wet chemistry lab's third sample.

"We had a shootout between Stone Soup and white stuff in a trench called Upper Cupboard," Hecht said. "If we had been able to confirm that the white material was a salt-rich deposit, we would have analyzed that, but we were unable to confirm that with various methods."

Salt would be an indicator of whether or not liquid water had been present in the past, something that Phoenix is looking for signs of to characterize Mars' potential past habitability. Salt would concentrate in places that may have been wet. The Stone Soup sample will also offer scientists a chance to analyze salt distribution.

Phoenix is also analyzing a sample taken from another trench at a depth between the surface and the hard icy layer in its Thermal and Evolved-Gas Analyzer, which heats up samples and analyzes the vapors they give off to determine their composition.