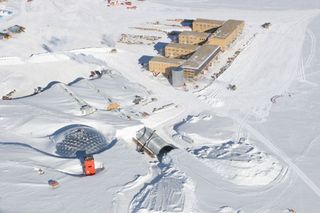 NASA Ames scientist Chris McKay likened a lunar outpost to the permanent research bases in Antarctica. In this aerial view, the new Amundsen-Scott South Pole Station is shown (at upper right) along with its predecessor (lower left), which has been in operation for over 50 years.
(Image: © NSF/Ethan Dicks.)

MOFFETTFIELD, California — One of the host of challenges facing NASA as the agency plansto rekindle robotic and human exploration of the moon is the development of acorps of investigators and technologies suitable for long-term missions akin tothe research stations that dot Antarctica.

PeteWorden, director of the NASA Ames Research Center, called the establishment ofa permanently occupied outpost on the moon as the ?next step? toward thesettlement of the solar system — one that will be international in nature.

?Unlike thelast time we went to the moon?everybody is going to the moon now. There are atleast a dozen proposals I know of from various countries to go to the moon,?Worden said. And as NASA makes plans for the scientific research it willconduct there, a key priority is restocking the community of lunar researchers.

Carryingout prolonged research on that distant and dusty world calls for new insightinto the impact of the lunar environment on machineryand people. Also, how best to use the moon as an observational platform isbeing appraised — not only to investigate deep space phenomenon viaastrophysical and heliophysical instruments, but also emplacement on the moonof Earth-observing devices.

?This isgoing to open a new era of scientific understanding of not just the moon andthe formation of the Earth-moon system, but how we can live on another world,?Worden told the audience of some 500 leading scientists, engineers and specialistsin other disciplines who convened here July 20-23 at the behest of the newlylaunched NASA Lunar Science Institute (NLSI). Managed by the Ames ResearchCenter, the NLSI has been set up to tackle scientific pursuits ?of the moon?onthe moon?and from the moon.?

To fire up interestin Moon exploration, NASA released last June a Cooperative Agreement Noticethat solicited proposals to further NLSI objectives as well as the spaceagency?s overall futurelunar exploration needs. Those proposals are due at the end of this month.

?I thinkthe way to sell it is that we?re going to the Moon as a step beyond,? said ChrisMcKay, an Ames-based space scientist who convened the NASA Lunar ScienceConference. ?The other is that the moon is an interesting enough place to stayas well. People talk about exit strategies on the moon?to touch base, leave andgo to Mars. I think that?s dumb.?

McKay likenedan outpost on the moon to the permanent research base in Antarctica - an encampmentthat has been operating for 50 years that is a science-driven activity that?smotivated by broad interests of the United States as a nation.

?If we canwork in Antarctica for 50 years, and still want to go back and do more?the moonalso is at least as interesting as Antarctica,? McKay told SPACE.com.?There?s still a lot of science to be done on the moon. It?s a natural world withnatural complexity.?

When looking atthe moon, David Morrison, the interim director of the NLSI, said it?s an objectthat is our nearest neighbor in space?a place that?s going to have a multitudeof mostly small satellites and landers over the next decade. ?The moon ishot?or cool?depending on what your generation is.?

Morrison said thatthere is a very robustinternational interest in lunar exploration. He highlighted the nearly twoyears of orbiting the moon in 2004-2006 by the European Space Agency?s SMART-1,and also flagged the fact that both Japan and China have orbiters presentlycircling the Moon, with India to send off its lunar orbiter in a few months.

That globalinterest in the moon could possibly use more coordination, Morrison noted, withthe NLSI perhaps helping in this regard. ?But I don?t think we have to go sellthe moon. I think it sold itself,? he told SPACE.com.

?But I?mhere to tell you, it?s not your father?s Oldsmobile,? he said, contrasting pastlunar exploration with today?s 21st century agenda. ?With humansgoing back, the lunar environment needs to be studied?and studied well.?

Addressingan audience question regarding stability of lunar science funding given thepolitical winds of change due to a new U.S. President, Green responded: ?If Iwere a betting man I would say the lunar program is here to stay.?

Paul Spudis, a senior lunarscientist at the Lunar and Planetary Institute in Houston, suggested that theexpertise needed to liveand work off-planet can be honed on the moon. Those skills are to ?arrive,survive, and thrive.?

?I?ve been trying to get NASA toadopt a mission statement of why we?re going to the moon?not six themes, not182 different sub-goals.? The sentence that encapsulates the mission is, hesaid: ?We?re going to the moon to learn the skills we need to live and workproductively on another world.?

Spudis advised that the challenge forNASA?s vision of space exploration is to architect a program that uses smallincremental and cumulative steps to build a capability over time. ?It?s not thenext NASA program. It is not an entitlement to the science community. It is nota rocket-building program. It is a strategic direction,? he said.