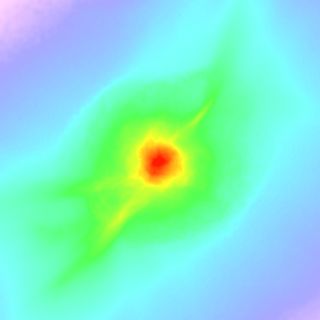 Anew supercomputer simulation offers the most detailed view yet of how the firststars evolved after the Big Bang.

Themodel follows the simpler physics that ruled the early universe to see how coldclumps of gas eventually grew into giant star embryos.

"Untilyou put that physics in the code, you can't evaluate how the first protostarsformed," said Lars Hernquist, an astrophysicist at Harvard University whose early-stars model is detailed in this week's issue of the journal Science.His remarks were made Wednesday during a press teleconference.

Mysterious "darkmatter" provided the first gravitational impetus for hydrogen andhelium gas to start clumping together, Hernquist said. The gas began releasingenergy as it condensed, forming molecules from atoms, which further cooled theclump and allowed for even greater condensing.

Eventuallygravity could not condense the gas cloud any further, because the densely-packedgas exerted a pressure against further collapse. That equilibrium point markedthe beginning of an embryonic star, called a protostar by astronomers.

Simulationruns show that the first protostar likely started with just 1 percent the massof our sun, but would have swelled to more than 100 solar masses in 10,000years.

"Nosimulation has ever gotten to the point of identifying this important stage inthe birthof a star," Hernquist noted.

Thefirst protostars reached such massive size because they consisted of mainlysimple elements such as hydrogen and helium. That bloated existence means the starswhich eventually form from such protostars could create heavierelements such as oxygen, carbon, nitrogen and iron in their fiery furnaces.

Theresearchers eventually hope to run the simulation all the way up through thepoint where protostars igniteinto true stars.