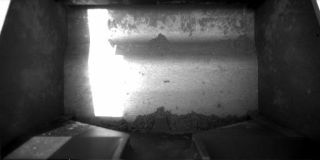 This image, taken by NASA's Phoenix Mars Lander's Robotic Arm Camera on Sol 50, the 50th day of the mission, July 15, 2008, shows material collected in the lander's scoop from the rasping activity on the Martian surface. The collected material, believed to be icy soil, is near the bottom of the image.
(Image: © NASA/JPL-Caltech/University of Arizona/Max Planck Institute)

NASA's Phoenix Mars Lander has successfully drilled into the rock-hard ice layer below the Martian surface and collected the frozen shavings in its robotic arm scoop, NASA said on Wednesday.

The ice is too hard for Phoenix's scoop to dig into it, so the craft used a powered rasp on the back of the scoop to drill into the ice, loosen the material and kick it up into the scoop.

Images and data sent from Phoenix back to Earth on Wednesday confirmed that the material was in the scoop and showed that it had changed slightly during the hours after it was collected.

When ice is exposed to the air on Mars, it starts to sublimate, or convert into water vapor (whereas ice exposed to air on Earth tends to melt).

The rasp made two separate holes in the trench informally named Snow White, which Phoenix enlarged over the weekend and early in the week.

This ice collection trial was a test of the rasping method of gathering a sample. The same method will be used in the coming days to collect a sample for Phoenix's Thermal and Evolved-Gas Analyzer, which bakes samples in its tiny ovens and analyzes the vapors they give off to determine the composition of the sample.

"This was a trial that went really well," said Richard Morris, a Phoenix science team member from NASA's Johnson Space Center in Houston. "While the putative ice sublimed out of the shavings over several hours, this shows us there will be a good chance ice will remain in a sample for delivery" to Phoenix's ovens.

Mission scientists will command Phoenix to continue scraping and enlarging the Snow White trench and conduct another series of rasp tests on Wednesday.