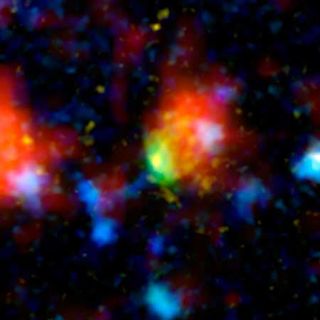 The green and red splotch in this image is the most active star-making galaxy in the very distant universe. Nicknamed Baby Boom, the galaxy is churning out an average of up to 4,000 stars per year. Red: star formation. Green: gas in the Baby Boom galaxy. Blue galaxies in the foreground that are not producing nearly as many stars. Yellow/orange: starlight from the outer portion of Baby Boom. The red blob to the left is another foreground galaxy that is not producing a lot of stars.
(Image: © NASA/JPL-Caltech/Subaru)

Our galaxy cranks out about 10 new stars per year. Now astronomers have found one near the beginning of time that's generating a whopping 4,000 a year. At that rate, the galaxy needs only 50 million years to grow into one equivalent to the most massive ever observed.

In the so-called Hierarchical Model of galaxy formation, galaxies are supposed to slowly bulk up their stars over time by absorbing tiny pieces of galaxies, rather than in one big burst.

"This galaxy is undergoing a major baby boom, producing most of its stars all at once," said Peter Capak of NASA's Spitzer Science Center at Caltech. "If our human population was produced in a similar boom, then almost all of the people alive today would be the same age."

The galaxy is 12.3 billion light-years away, so the light astronomers are observing was emitted when the universe was just a billion years old. It is the brightest starburst galaxy ever spotted in the distant universe. Other galaxies with such rapid rates of star formation are nearby and thus much more evolved.

"If the universe was a human reaching retirement age, it would have been about 6 years old at the time we are seeing this galaxy," Capak said.

"Before now, we had only seen galaxies form stars like this in the teenaged universe, but this galaxy is forming when the universe was only a child," he explained. "The question now is whether the majority of the very most massive galaxies form very early in the universe like the Baby Boom galaxy, or whether this is an exceptional case. Answering this question will help us determine to what degree the Hierarchical Model of galaxy formation still holds true."

When stars are born, they shine with a lot of ultraviolet light and produce a lot of dust. The dust absorbs the ultraviolet light but, like a car sitting in the sun, it warms up and re-emits light at infrared and submillimeter wavelengths, making the galaxy unusually bright in this portion of the light spectrum.

The discovery was made using several telescopes, including NASA's Spitzer and Hubble space telescopes and the James Clerk Maxwell Telescope and Subaru Telescope in Hawaii. It is detailed in the July 10 issue of Astrophysical Journal Letters.

"We may be witnessing, for the first time, the formation of one of the most massive elliptical galaxies in the universe," said study co-author Nick Scoville of Caltech.