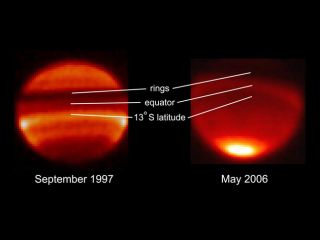 Scientists have discovered a wave pattern, or oscillation, in Saturn's atmosphere only visible from Earth every 15 years. The pattern ripples back and forth like a wave within Saturn's upper atmosphere. In this region, temperatures switch from one altitude to the next in a candy cane-like, striped, hot-cold pattern.
(Image: © NASA/JPL)

The planet Saturndoes the wave in its atmosphere, but it's only visible from Earth every 15years, a new study finds.

Two decadesof staring at the ringed planet in ground- and space-based studies paid off whenscientists discovered a wavepattern similar to one found in Earth's upper atmosphere.

"Youcould only make this discovery by observing Saturn over a long period oftime," said the ground study?s lead author Glenn Orton, a planetaryscientist at NASA's Jet Propulsion Laboratory in Pasadena, Calif. "It'slike putting together 22 years worth of puzzle pieces, collected by a hugelyrewarding collaboration of students and scientists from around the world onvarious telescopes."

Researchfrom Orton?s study and a space-based one using the Cassini spacecraft is detailedin the May 8 issue of the journal Nature.

The wavepattern ripples back and forth in Saturn's upper atmosphere due to bands ofdifferent temperatures at various altitudes. Changing temperatures force thewind to keep whipping back and forth from east to west, causing the entireregion to move like a wave.

NASA's Cassinispacecraft provided a space-based infrared snapshot of Saturn's wave inaction, allowing scientists to compare it with similar atmospheric patterns onEarth and Jupiter. Earth's wave takes about two years and Jupiter's wave takesmore than four Earth years, but changes on Saturn may occur over much longerperiods of up to 30 Earth years, or one Saturn year.

"It'sthis great synergy of using ground-based data over time, and then getting upclose and personal with the oscillation in Saturn's atmosphere through Cassini,"said Mike Flasar, a principal scientist for Cassini at NASA's Goddard SpaceFlight Center in Greenbelt, Md., and co-author of the space-based study."Without Cassini, we might never have seen the structure of theoscillation in detail."

Cassini'ssnapshot with its Composite Infrared Spectrometer further revealed thatSaturn's equator flips from hot to cold. The temperatures on either side of theequator also apparently switch every Saturn half-year.

Longerstudy of Saturn may allow scientists to better understand this phenomenon, andparticularly why the temperature switch happens as the sun is directly overSaturn's equator.

Suchstrange climate behavior is hardly new for Saturn, which has displayedbaffling weather such as a swirling hexagon circling its north pole.