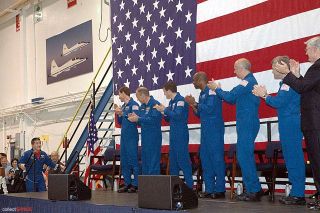 Havingsailed in space for the past two weeks to install the European Space Agency's(ESA) Columbus science lab on the International Space Station, the crew ofspace shuttle Atlantis came home to Houston on Thursday. Despite the overcastskies, a crowd of their mission training and team members, friends and, perhapsmost importantly to them, their families, gathered to greet the sevenastronauts for a homecoming celebration.

"Whata great scene to see all of you who came out in less than desirableweather," said STS-122mission pilot Alan Poindexter of the rain falling just outside the hangarat Ellington Field.

"Wereally appreciate you coming out on maybe not the prettiest day of thewinter," added commander Stephen Frick. "It just makes us feel goodto know that people are watching us and thinking about us and happy that we'rehome, and we are happy to be home."

"Letme tell you, it's been a long time training and even though the mission goes byin a blur, it's a long and it's a busy mission. It's a great relief to have itcomplete and successful, and have the Columbus module up there and working onthe space station and for all of us to be back home safe," said Frick.

The nearly13-day flight highlighted the multi-nation effort that has resulted in theassembly of the space station. In addition to theEuropean lab, which was joined with U.S. and Russian components already onorbit, the six-person crew used Canadian-built robotic arms to move Columbus from the shuttle's payload bay to its berth on the outpost.

Threespacewalks were also needed to ready the lab, which was named after the 15thcentury Genoan explorer, to outfit it with exterior-mounted scienceexperiments, and to replace a nitrogen tank used for cooling the ISS.

"Itwas very challenging and we had three challenging spacewalks but fortunately wehad the best team in the business to get us ready for it and to executeit," said Rex Walheim, who performed all three of theexcursions.

Walheim wasjoined by first-time flyer Stan Love on two of the spacewalks and ESA astronautHans Schlegel for the other, though that order was originally planned to beflipped. A "crew medical issue" had Love take Schlegel's place on themission's first spacewalk.

"Hewas faced with having to jump into an EVA in the last minute that he had seenon the ground, but hadn't really trained on, and just did a wonderful job withRex to get EVA 1 complete," Frick commented about Love's work.

"Hetook my first EVA and fulfilled it as I couldn't have done it better,"said Schlegel, who recovered in time to make the flight's second spacewalk ashe was scheduled to do. "Nobody has been more glad and more relieved thateverything worked so flawlessly and performed so nicely."

Though thenature of Schlegel's illness wasn't disclosed, Love said that the tables couldhave easily been turned.

"I canonly say that it could have just as easily been you that had to take my placeand I am sure you would have done it better than I," he replied toSchlegel's comments.

Despite hisslight setback, Schlegel was proud of his and his crewmates success on the mission.

"Ofcourse, me as the European, as a German, and here I speak for Leopold[Eyharts] as well, who was part of our ascent team as a French-European, itwas a tremendous feeling of pride," he said of launching Columbus,Europe's first long duration crewed space platform. "We installed theexternal payloads, we outfitted it, we activated it, we worked on theexperiments and more over, we even did some maintenance repair work onstation," said Schlegel.

"It istruly an effort that goes beyond country boundaries. It just spans over thewhole world of which we travel around in 90 minutes. That is really somethingthat builds up in your heart, in your stomach, wherever you're feeling is athome."

Continuereading about the sacrifices, support, and life in space and back on Earth at collectSPACE.com.