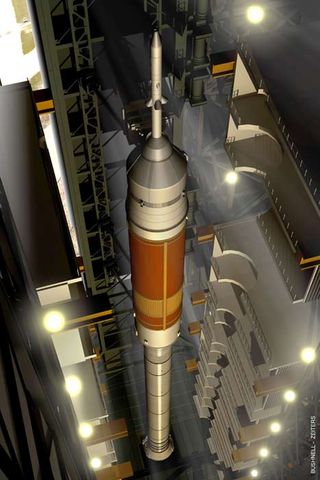 An artist's rendition of Ares I being stacked in the vehicle assembly building at NASA's Kennedy Space Center in Florida. Houston-based Boeing won NASA's contract to built the rocket's upper stage, which appears in orange below the conical Orion crew capsule.
(Image: © NASA.)

WASHINGTON (AP) - NASA iswrestling with a potentially dangerous problem in a spacecraft, this time in amoon rocket that hasn't even been built yet.

Engineers are concernedthat the new rocket meant to replace the space shuttle and send astronauts on theirway to the moon could shake violently during the first few minutes offlight, possibly destroying the entire vehicle.

?They know it's a realproblem,'' said Carnegie Mellon University engineering professor PaulFischbeck, who has consulted on risk issues with NASA in the past. ?This thingis going to shake apart the whole structure, and they've got to solve it.''

If not corrected, theshaking would arise from the powerful first stage of theAres I rocket, which will lift the Orion crew capsule into orbit.

NASA officials hope to havea plan for fixing the design as early as March, and they do not expect it todelay the goal of returning astronauts to the moon by 2020.

?I hope no one was soill-informed as to believe that we would be able to develop a system to replacethe shuttle without facing any challenges in doing so,'' NASA administratorMichael Griffin said in a statement to The Associated Press. ?NASA hasan excellent track record of resolving technical challenges. We're confidentwe'll solve this one as well.''

Professor Jorge Arenas ofthe Institute of Acoustics in Valdivia, Chile, acknowledged that the problemwas serious but said: ?NASA has developed one of the safest and risk-controlled space programs in engineering history.''

The space agency has beenworking on a plan to return to the moon, at a cost of more than $100 billion,since 2005. It involves two different rockets: Ares I, which would carry theastronauts into space, and an unmanned heavy-lift cargo ship, Ares V.

The concern isn't theshaking on the first stage, but how it affects everything that sits on top: theOrion crew capsule, instrument unit, and a booster.

That first stage iscomprised of a five-segment reusable solid rocket booster derived from the type thatNASA uses to launch the shuttle and would be built by ATK Launch Systems ofBrigham City, Utah.

The shaking problem, whichis common to solid rocket boosters, involves pulses of added accelerationcaused by gas vortices in the rocket similar to the wake that develops behind afast-moving boat, said Arenas, who has researched vibration and space-launchissues.

Senior managers were toldof the findings last fall, but NASA did not talk about them publicly until theAP filed a Freedom of Information Act request earlier this month and thewatchdog Web site Nasawatch.com submitted detailed engineering-orientedquestions.

The response to thosequestions, given to both Nasawatch and AP, were shared with outside experts,who judged it a serious problem.

NASA engineerscharacterized the shaking as being in what the agency considers the ``redzone'' of risk, ranking a five on a 1-to-5 scale of severity.

?It's highly likely tohappen and if it does, it's a disaster,'' said Fischbeck, an expert inengineering risks.

The first launch ofastronauts aboard Ares I and Orion is set for March 2015.