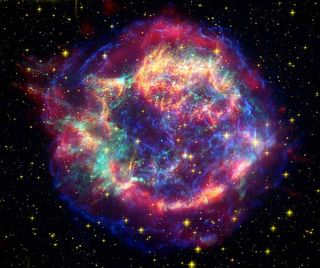 The cooling remnants of the supernova Cassiopeia A, as shown by a long exposure with NASA's Spitzer Space Telescope.
(Image: © NASA/JPL-Caltech/Univ. of Minn.)

Dustlittered the early universe and seeded the formation of rocky planets such asthe Earth. But where, exactly, most of the celestial grit came from wasuncertain until now.

Astronomershave found 10,000 Earth masses worth of dust surrounding Cassiopeia A, theremnants of a supernova about 11,000 light-years away from our planet. The NASASpitzer Space Telescope observations show silicates, carbon, iron oxide,aluminum oxide and other dust-forming chemicals around the blown-out star.

JeongheeRho, an astronomer at the Caltech in Pasadena, Calif., thinks the discoverysignals the first strong evidence that massiveexploding stars really are the litterbugs of the universe.

"Nowwe can say unambiguously that dust — and lots of it — was formed in the ejectaof the Cassiopeia A explosion," Rho said. She and her team will detailtheir findings in the Jan. 20 issue of the Astrophysical Journal.

Stars likethe sun are thought to burn too long to seed the cosmos with enough grit, andmassive stars are probablytoo gassy and short-lived, the thinking goes. Cassiopeia A's explosion isextremely recent — the light reached Earth just 325 years ago — but Rho and herteam think cosmic dust balls similar to the remnant began producing the stuffof terrestrial planets billions of years ago.

WithinCassiopeia A, the astronomers found cool yet freshly-made dust mixed in withjettisons of gas called "unshocked ejecta" deep inside the supernovaleftovers.

"Dustforms a few to several hundred days after these energetic explosions, when thetemperature of gas in the ejecta cools down," said team member TakashiKozasa, an astronomer at Hokkaido University in Japan.

This activityhad never been seen before and hints that supernovae can crank out plenty ofdust to lead to planet formation, though it doesn't account for all of theuniverse's grit.

"Perhapsat least some of the unexplained portion is much colder dust, which could beobserved with upcoming telescopes, such as Herschel," said team member HaleyGomez, an astronomer at the University of Wales in the UK.

Set tolaunch in 2008, scientists hope to use the European Space Agency's Herschel spacecraftto find such cold dustnear quasars, thought to be hyperactive black holes, which X-rayobservations suggest could produce the stuff.