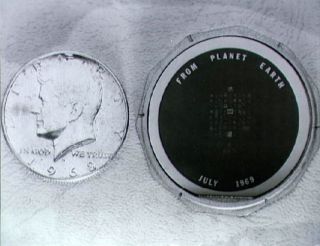 The Apollo 11 silicon disc placed near a half-dollar coin to illustrate its relative size.
(Image: © NASA)

Within afew feet of the first boot print made on the Moon, under the ladder on which a U.S. flag was stowed and a commemorative plaque is stillattached, lies a small white cloth pouch.

Inside thatbag, next to a couple of embroidered emblems, medals and a gold olive branch,is a small case. Contained within that thin metal sheath is a silicon disc aboutthe size of a half dollar coin. Etched onto that disc, in letters no largerthan one-fourth the width of a human hair, are 73 messages.

Such anitem, as small as it is, hidden as it was, could be mistaken as insignificantand easily forgotten. And it almost was... twice, as Tahir Rahman, aKansas-based physician and space history enthusiast reveals in his new book,"We Came In Peace For All Mankind: The Untold Story Of The Apollo 11Silicon Disc."

Rahman, whoas a hobby collects Apollo 11 memorabilia, in particular letters and documentssigned by astronaut Neil Armstrong, recently came across a duplicate of thedisc deposited on the Moon and became curious as to its history.

"Ithought I knew most aspects of the Apollo 11 mission," Rahman wroteto collectSPACE.com. "When I acquired adisc for my collection, I quickly discovered that only a sentence or two wasmentioned about it in space history books." So, Rahman set about fillingin the missing story.

Afterdeciding to plant an Americanflag on the Moon and before the wording was finalized for the plaquedeclaring that "we came in peace for all mankind," the U.S. StateDepartment authorized NASA to solicit messages of good will from the leaders ofthe world's nations to be flown and left on the Moon.

There wereonly two minor challenges: NASA didn't know yet how they would archive thosemessages for flight and as it was June 1969, there was only one month remainingbefore Apollo 11 would launch for the lunar surface.

"I wasamazed at how NASA and the State Department rushed to get these messages beforelaunch," Rahman said. In his book, he describes how 116 countries werecontacted but only 73 responded in time. Some, confused by the request, repliedasking for more details without realizing that the window for their inclusionwas closing fast.

"Inview of our total ignorance of this project," began a telegram from theKing of Thailand included in "We Came In Peace," "wouldappreciate any information you can provide concerning NASA's invitation to sendmessage... number of countries responding... methods of recording and method ofdeposit on the Moon."

Regardingthe 'methods of recording and deposit,' NASA turned to the Sprague ElectricCompany of North Adams, Massachusetts, for a solution. No stranger to working for the government-- the company had designed a firing capacitor for the Manhattan Project -- Spraguewas also an established NASA contractor with more than 50,000 components oftheir manufacture already installed in the Apollo11 spacecraft.

Still, thiscontract was unique, requiring a new material, a new invention (Rahman includesthe text of the patent in the book's appendix) and a short turnaround of justthree weeks. Even after devising the technique to inscribe the microscopicmessages on the 1.5 inch, 99%-pure silicon disc and delivering a 'final'version just a week prior to lift off, Sprague was sent scrambling again byNASA to add more nations' notes that were late to arrive.

Nor werethese messages simple texts. Some included intricate artwork, such as the Vatican's message by Pope Paul VI. Thoughnot visible to the naked eye, a low-power magnification was all that was neededto reveal the mini masterpieces.

"Thefirst time I looked through a microscope at the disc, I was amazed. There were allthese messages in foreign languages in beautiful gold scripts. The message fromthe Vatican in the center was especiallystunning with its gold ornate frame," Rahman described.

On July 11,1969, just five days before a Saturn Vrocket was set to take off with Neil Armstrong, Buzz Aldrin, and MichaelCollins, Sprague delivered the second, final disc to NASA. The space agencypackaged the round wafer in a metal case resembling a woman's make-up compactto protect it during its journey to the Moon. That in turn was placed in asmall pouch with other commemorative items, which Aldrin would carry in hisspacesuit's sleeve pocket.

On July 20,as Collins orbited the Moon, Armstrong and Aldrin landed on its surface.History's first moonwalkers had only two and a half hours to explore the lunarterrain, collect 50 moon rocks and set-up scientific instruments. Theirchecklists also called for them to take part in a few commemorative activities,including erecting the U.S. flag and reading the inscriptionfrom the plaque attached to their lander. Unscheduled events, such as asurprise call from President Nixon compressed their timeline further.

Thus, as Aldrinwas climbing up the ladder to reenter their spacecraft for their return home,it was Armstrong who remembered the "package" on Aldrin's arm.

"Howabout that package out of your sleeve? Get that?" Armstrong called out.

"Guessso," Armstrong said, and with that Aldrin tossed the package –silicon disc tucked inside – down to the Moon's surface. Armstrong thennudged it with his foot.

"Okay?"Armstrong asked of its placement.

"Okay,"responded Aldrin, which was all the pomp and circumstance the disc would everreceive.