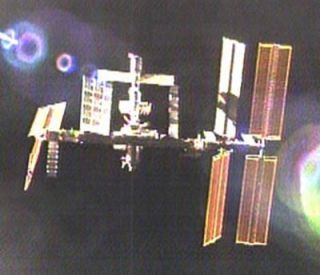 The International Space Station as seen from space shuttle Discovery after undocking on Nov. 5, 2007 during the STS-120 mission.
(Image: © NASA TV.)

CAPECANAVERAL - The seven astronauts on board the space shuttle Discovery scanned their spacecraft's heat shield for potential damage Monday and are gearing upfor a planned Wednesday landing.

RickLaBrode, lead shuttle flight director for the STS-120 mission,said eight potential impacts by micrometeorites or space junk were detected during Discovery's 13 days in space, but he is confident the anomalies pose nothreat.

"Allof these are expected to be cleared with the inspection that we're performingtoday," LaBrode said. The potential impacts to Discovery's heat-resistantpanels were recorded by sensors mounted to the shuttle's wing leading edges, which bear the brunt of searingatmospheric reentry.

As for whatthe shuttle's sensors picked up, space shuttle program manager Wayne Haleexplained that the harsh environment of space--which can swing from scorching toicy temperatures in moments--likely caused the anomalies.

"Thereare no indications of any damage," Hale said, but noted engineers on theground will pore over the data retrieved by Discovery's sensor-tipped extensionboom.

As theSTS-120 crew wrapped up the thorough heat shield inspection, shuttle commanderPamela Melroy took a moment to look outside the window and deliver alanding-day forecast.

"Wecan see the runway from orbit, so we're thinking the weather there is lookingpretty good!" Melroy told spacecraft communicator Tony Antonelli atMission Control of the KSC landing site. Antonelli joked that he would forwardher report to weather officers for review.

As of rightnow, flight controllers said only windy conditions are a concern for landingday, with gusts currently reaching about 25 mph (40 kph).

Hale saidMelroy opted for a daylight landing for pilot George Zamka because she felt more comfortable with theoption. The descending orbit--a northwest-to-southeast path--will takeDiscovery across the heartland of America, which has not been attempted sincethe loss of Columbia in 2003.

Haleexplained that noctilucent clouds, less air to slow the space shuttle down andextra propellant required to make the entry are the major reasons why it's notoften attempted. But better visibility, he said, is the bonus.

"It isa basic fact that landing in the daylight is safer and easier than landing inthe dark," Hale said.

Melroy andher crew delivered a 31,500-pound (14,288-kilogram) room to the space station,relocated a massive solar array truss and made an unprecedented repair of atorn solar wing during their mission. Tomorrow the crew will make finalpreparations for landing.