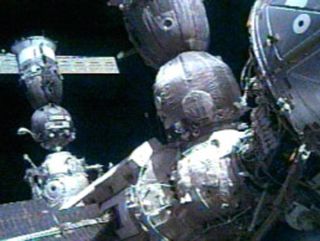 After two days ofspaceflight and a somewhat tricky docking, a new crew is aboard theInternational Space Station (ISS).

Expedition 10'sarrival marked the end of the first Soyuz flight for Chiao, Sharipov andShargin. They docked successfully at 12:16 a.m. EDT (0416 GMT) on Oct. 16.

"We try to do ourbest," Padalka replied.

With their SoyuzTMA-5 spacecraft docked at the Russian-built Pirs docking compartment, thereare currently three Russian spaceships attached to the space station. A SoyuzTMA-4 spacecraft - Shargin's ride home with the crew of Expedition 9 - iscurrently docked with the station's Zarya module, while a Progress supply shipis attached to the aft of end of the Zvezda service module.

With NASA's space shuttle fleet grounded until at leastMay 2005, Russia's Soyuz spacecraft are currently the only transport capable ofdelivering new crews to the ISS.

Expedition 10'sdocking was not without incident.

Six minutes beforedocking, with the Soyuz within 656 feet (200 meters) of the ISS and underautonomous control, the spacecraft's speed shot up considerably, exceeding thenormal flight velocities for docking maneuvers and setting off alarms, Russianflight controllers said during a post-docking news conference. An apparentmalfunction of the Soyuz's automated docking system seemed to be at fault, theyadded.

But Sharipov, whocommanded the two-day Soyuz trip to the ISS, calmly took manual control of thespacecraft, backed it away from the station, then brought in for a smoothdocking.

"I observed thetransition from autonomous to manual docking and it appeared seamless,"said Fred Gregory, NASA's deputy administrator, during a post-docking newsconference in Moscow. "The crew was calm."

"All crews aretrained for this scenario for the Soyuz," he told a group of reporters in apreflight news conference. "We are prepared."

It took about threehours to conduct leak checks between the Soyuz spacecraft and the ISS, afterwhich Expedition 10 entered the station at 3:25 a.m. EDT (0725 GMT).

While Chiao andSharipov have a full six months of spaceflight ahead of them - including twospacewalks and a series of maintenance and science experiments - the next eightdays will be dense with activity.

As the new keepers ofthe ISS, Chiao and Sharipov will receive updates from Expedition 9 regardingemergency procedures, equipment location, as well as ongoing experiments andstation issues. Sharipov and Padalka hope to repair a finicky Russian-builtElektron oxygen-generating device using spare parts brought up by Chiao andSharipov. Chiao also plans to work with Fincke to repair one of three U.S.space suits aboard the ISS, also using parts brought up by the new crew.

Meanwhile, Sharginhas eight packed days of science experiments planned, and will most likely nothave any free time during his stay aboard the ISS, Russian flight controllerssaid.

More immediately, allfive men are due start deactivating and unpacking the Soyuz TMA-5 spacecraft,then enter an extended, 10-hour sleep period today beginning at 2:00 p.m. EDT(1800 GMT). Expedition 9 and Shargin are currently scheduled to undock from theISS in their Soyuz TMA-4 spacecraft and land on the steppes of Kazakhstan onOct. 23.

Fincke told NASAastronaut Ken Bowersox that while it will be sad leaving, he and Padalka lookforward to seeing their families again. Fincke especially looks forward tomeeting his new daughter Tarali Paulina, who was born on June 18 while heorbited Earth.

"It still feels likesomeone's kicking you out of your apartment, doesn't it?" asked Bowersox, whoflew aboard the ISS Expedition 6 from November 2002 to May 2003.