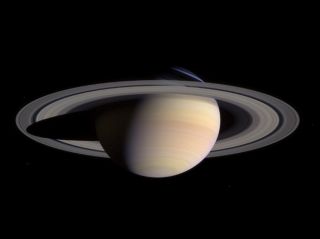 The formation of Saturn's rings is but one of the planet's many mysteries. They look solid, but they're made of particles, mostly dirty ice, from small grains to big boulders.
(Image: © NASA)

Humanity has known of Saturn since prehistory, but enigmas about this ringed world still abound—from new mysteries concerning a baffling hexagon of clouds on the planet to perennial puzzles concerning its famous rings.

The latest mystery is the giant hexagon circling Saturn's north pole. Scientists caught glimpses of it decades ago from the Voyager mission, but confirmed its existence with the Cassini spacecraft.

Nothing like the hexagon has ever been seen at any other planet, with each of its sides nearly 7,500 miles (12,500 kilometers) across—big enough to fit nearly four Earths inside. Thermal images show it reaches roughly 60 miles (100 kilometers) down into the planet's atmosphere. "It's a very bizarre object," said Kevin Baines, atmospheric expert and member of Cassini's visual and infrared mapping spectrometer team at NASA's Jet Propulsion Laboratory in Pasadena, Calif.

Although water swirling inside a bucket can generate whirlpools possessing geometric holes, "there's no bucket here," Baines said. "You're not flinging fluid against some wall."

Scientists have bandied about several other ideas concerning the hexagon's origin. Perhaps a giant spinning cylinder of gas stretching thousands of kilometers into Saturn lies at the hexagon's center, and the hexagon's cloudy walls emerged from interactions with slower-spinning gas at the cylinder's edges that did not spin as fast, Baines said. Or perhaps the hexagon arises from a complex interaction between waves undulating through the atmosphere and gas churning up it.

"Hopefully we'll learn more about the hexagon when the seasons on Saturn change and the sun begins to shine on the hexagon about 18 months from now," Baines said. Cassini's eagle-eyed cameras should show details of the hexagon 80 times sharper than those currently available via the spacecraft's thermal imagers.

Strange features abound within the rings of Saturn. These include hundreds of "record grooves" or narrow fluctuations in the B ring, the most massive ring. These also include "plateaus" in the C ring, the innermost main ring—broad, dark, sharp-edged features thicker than elsewhere in the ring. "No one has a clue what causes them," Jeffrey Cuzzi, a planetary scientist at the NASA Ames Research Center in California, said of these grooves and plateaus.

Not only are the origins of these features mysterious, but so are those of the rings themselves.

Some researchers argue the rings are debris left over from Saturn's formation, making them roughly as old as the solar system itself, or about 4.5 billion years old. Others say that if they were that old, they should be polluted with dirty ice from comets, which are thought to rain down often on gas giants, as the comet Shoemaker-Levy illustrated when it smacked into Jupiter in 1994.

The fact that the rings seem be made of relatively clean and not dirty ice suggests they might be only a few hundred million years old, or "no more recent than the age of fish on Earth," Cuzzi said. In this idea, they're made of rubble perhaps from a moon that got ripped apart.

Future observations from Cassini might help really understand what the rings are made of, which scientists could then compare with the compositions of comets or Saturn's moons to find the better match-up, Cuzzi said.

More knowledge about the origins of the rings and their features could help scientists understand more of the dynamics involved in other kinds of astrophysical disks, "such as the one that formed the planets in our solar system," said Matthew Hedman, a research associate at Cornell University.

The very length of the day on Saturn—that is, the rate at which the bulk of the planet spins—also remains a mystery. The planet's dense, cloudy atmosphere makes it impossible to simply peer down hundreds of miles to see how fast Saturn is actually spinning.

However, Saturn's magnetic poles are lined up nearly perfectly with the axis on which it spins. This has led to confusing results, such as Saturn's day improbably lengthening by about six minutes in the past 26 years. One possible explanation was that puffs of water from the Saturnian moon Enceladus's geysers may have literally clouded Saturn's magnetic field with ionized particles that changed how we saw Saturn's magnetic field, Baines said.

The water molecules become ionized by charged particles they encounter in Saturn's magnetic field, and then become trapped for a time in the field, weighing and dragging it down a bit so that the field actually spins more slowly. Scientists hope that by comparing Enceladus's geyser activity with Saturn's magnetic field spin over the next few years—perhaps finding a span of time when there's a lull in that moon's eruptions—they might be able to finally determine the true rotation rate of Saturn.

Saturn and the solar system's other giant planets also face what researchers call an "energy crisis"—their upper atmospheres are far hotter than can be explained by absorbed sunlight. Scientists had suspected the mechanism that causes the aurora borealis or Northern Lights on Earth might explain this heat. On Earth, super-hot particles from the solar wind collide with the planet's magnetic field  exciting atoms in the atmosphere that shed light and thus create auroras.

However, atmospheric physicist Alan Aylward at University College London along with physicist Chris Smith and their colleagues found auroras could actually cool the upper atmospheres of gas giants, by forcing air closer to the equator down to lower, colder depths.

The extra heat astronomers see might get explained by energy from gravity waves, atmospheric oscillations up and down caused by the tug of war between the planet's gravity and the buoyancy of the atmosphere's gas. (These gravity waves differ from gravitational waves, or fluctuations in space-time itself.) Or Saturn's electric fields could be even more complex than before thought.

"We don't even understand the details of the electric fields on Earth, and those on Jupiter and Saturn are quite a bit farther away and of different compositions," Aylward said.