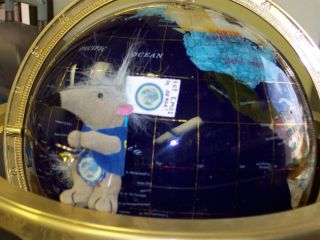 Barbara Morgan, the first of NASA's educator astronauts to fly in space, has surprises aboard space shuttle Endeavour for the people and organizations that have supported her 22 year journey to orbit.

"I am flying..." began Morgan, responding to a query by collectSPACE.com about the items she was taking. After a pause however, she asked, "Can I keep that a surprise?" noting that the recipients weren't aware about the items.

(At her request, collectSPACE.com has omitted the specific items Morgan is flying from the Official Flight Kit manifest of souvenirs from space.)

Morgan was originally selected as back-up to Teacher In Space finalist Christa McAuliffe, who died on Challenger with the STS-51L crew in January 1986. Ten years later, NASA announced it would train Morgan as an astronaut, leading to her current STS-118 flight on-board Endeavour.

As part of her mission, Morgan is chaperoning millions of basil seeds to and from space, to later be distributed to students who design plant growth chambers for future use on the Moon.

Though Morgan desired to keep her personal mementos private, her fellow crew mates spoke with collectSPACE.com before they launched about the souvenirs they packed to orbit for others.

Mission Specialist Al Drew, who was the last astronaut to be assigned to the STS-118 crew, selected a souvenir that had connections to both his place aboard Endeavour and to his high school in Washington, DC.

"Every crew member has a letter associated with him and being the seventh crew member, I got 'G'. Everybody has a color associated with him and mine is actually purple. The big thing at Gonzaga [College High School] is that we are the 'Purple Eagles' and I have a big purple 'G', so I figured I would put that right on my checklist and be happy to fly that," explained Drew.

Besides his schools, Drew is also flying patches from his time as a "rotorhead", a helicopter pilot in the Air Force. In particular, he packed patches for the squadrons he led.

"I commanded a test unit at Hurlburt Field, testing special operations aircraft. [I am] flying one of their patches. They have actually gotten bigger and fancier since I was there, so I am flying the old patch from when they were just a humble detachment," he said.

Like Drew, mission specialist Tracy Caldwell took items from her academic history. She is flying mementos for "the professors and advisors that have been instrumental in my development and in my education, kind of getting me where I am today," she said.

"Like from the town that I kind of grew up in, has a banner that represents all of the schools in that area. It's kind of a small town, so they can all fit on one banner," Caldwell said while laughing. "And my mom is really involved in the school system over there so it's kind of special that she can be involved in that as well."

Caldwell took a doll, "Peter the Anteater" from University of California, Irvine, where she was a postdoctoral fellow. The toy mascot has a flag reading "First EMSI in Space", with EMSI standing for Environmental Molecular Sciences Institute, a nationwide group that funds research at UCI.

Caldwell also has items from California State University at Fullerton and the University of California, Davis, her alma maters from which she earned her bachelor and doctorate in chemistry respectively.

"My research advisor from UC Davis who is a close friend, I asked him to make something. He had made up a banner that had the school's emblem and the department's emblem and then it had a molecular reaction and it had some names. When I first looked at it, I [said] 'Oh, that's cool,' 'cause you know it's got these molecules on it and then I look at it closer and I realized it was the reaction, the mechanism that I discovered," described Caldwell. "It was actually the header to a paper that I wrote, and that was my name and then my lab partner's name and his name, as if it were on the actual journal article itself. And he took the mechanism that I determined, I shouldn't say I discovered it, and it was my very first paper. It was a very momentous thing."

"It's kind of funny when you ask people to provide these items because they think of you instantly and then whatever item they come up with they want to represent you. And me, as the person doing the asking, I want it to represent them because I get all this cool stuff, I get to go up in space! I want to take something for [them] and it's kind of funny that interchange of "No, no, no... I want it to be about you, not about me," but sometimes you cannot convince them," shared Caldwell.

"I offered most of them up to folks who work at NASA. I suggested to our commander Scott Kelly, I said 'Hey, the folks that process the vehicle down at KSC, why don't we offer them up some of our personal spots.' I said, 'I'll give up five or 10 of my slots' — we get 20 of them — 'I'll be glad to offer up 5 or 10 of them, because if these folks at the Kennedy Space Center do their job, and they do, then we have a very safe and successful mission.' So I said, 'We really need to say thank you to these folks,'" he said.

"[I'm] trying to give back to some of the organizations that do great things, for example, the local police department, town, the city, the military units I have been affiliated with or my friends are now affiliated with, just to give them a little payback," said Hobaugh. "It's a reward for them for all the hard work and effort they do and the personal contact I have with them."

"I had a kid ask from some school in New Zealand, a kid I met one time, if I would fly his New Zealand striped, really cool looking blazer from his school, but I said it was too big. So what I did [fly] was the crest. What else did I fly? A patch from a friend of mine's squadron, who is the CO of the X-31 at China Lake," Kelly shared.

Spacewalker Dr. Dave Williams, M.D., who is flying on behalf of the Canadian Space Agency, chose items that represent his country and his mission.

"Rick Hansen is a Canadian who has cycled around the world in a wheelchair, believe it or not, and he is a paraplegic. I am flying one of his gloves in space, kind of recognizing that most people, when [they] think about wheelchairing all the way around the world, immediately would say 'That's impossible. You can't actually do that.' Part of flying in space is to demonstrate that making the impossible possible is something that we do in the space program," said Williams.

"On a personal front, my wife is a pilot with Air Canada, and she flies A320 aircraft, she's a captain on those. So I am going to be flying her captain's wings in space. That way when she's flying in the A320 she can say 'My wings have gone faster than Mach 25.'"

"And I asked my kids, what would you want me to take in space as a memento for you and they kind of thought about it a little bit and in the end they came up with silver medallions that we have, which we take our patch and make a medallion from it, because they wanted something that represented the whole mission and the crew itself. I think it's going to be really exciting to do that for them."