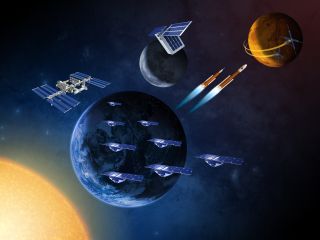 LOGAN, Utah — NASA is responding to the growing interest in, and capabilities of, small satellites for science applications with an initiative that will spend $100 million a year on a series of projects.

In a speech at the AIAA/Utah State University Conference on Small Satellites here Aug. 6, Thomas Zurbuchen, NASA associate administrator for science, outlined that initiative, which includes efforts ranging from a call for proposals for technology demonstration missions to new launch opportunities for smallsats.

"We're in business for small satellites and cubesats," he said, citing as "proof points" both ongoing smallsat missions and new programs he announced in his address. "We're going to realize the importance of small satellites not just as a platform but as an enabler to do science that is otherwise not achievable."

Those efforts are part of an overarching initiative within NASA's Science Mission Directorate that will spend $100 million on smallsat projects, starting in the current fiscal year. That figure was finalized only about 10 days ago, he said, with the final approval of the overall operating plan for the agency for this year.

"This was the first initiative I put in place when I joined two years ago," he said, citing his experience chairing a National Academies study on the scientific utility of cubesats released in 2016 just a few months before he joined the agency as head of the Science Mission Directorate. "I felt, because of that Academies study, that it was absolutely critical that we do this."

Part of that initiative is an effort to purchase Earth science data from constellations of satellites. Zurbuchen announced that the agency was making first awards from that program to DigitalGlobe, Planet and Spire, companies that operate fleets of satellites that provide imagery or weather data. He did not disclose the size of the individual awards or their total value, although original plans estimated spending $25 million on such data.

Zurbuchen said NASA was interested in buying data from companies that have already made use of it from primary customers. "If you have data that is of value to the science community, if you've expended the value that comes from latency and so forth, and you want a secondary market, we're in business," he said.

NASA first announced plans to make such data purchases in 2016, then restarted the effort late last year with a goal of making awards in early 2018. "Thanks for your patience. Thanks for sticking with it," he said.

NASA currently has a growing fleet of cubesat and other smallsat missions, primarily in Earth science and heliophysics. One such satellite is a cubesat called RainCube recently deployed from the International Space Station to test the use of Ka-band radar for measuring precipitation. The spacecraft just performed the first successful test of its radar, Zurbuchen announced at the conference.

Another element of the smallsat initiative is a new announcement of opportunity for technology demonstration missions in heliophysics. Zurbuchen said NASA is planning to invest up to $65 million in smallsat missions that would fly along with the Interstellar Mapping and Acceleration Probe, which will launch in 2024 to the Earth-sun L-1 Lagrange point.

"This is really a novel type of application because of the fact that it deliberately focuses on enhancing the technological capabilities in that area," he said. "If successful, this will not only teach us new science but will protect technological infrastructure that is sensitive to space weather."

Zurbuchen added that NASA will provide more rideshare opportunities. Going forward, when NASA purchases a launch for a science mission, it will also acquire an EELV Secondary Payload Adapter (ESPA) ring that can accommodate secondary payloads, including both NASA smallsats as well as those from outside the agency.

That approach is different from current approaches, where an ESPA ring may be added later in the mission development process. "We're not going to ask whether we need it," he said. "You have to convince us that we don't need it."

NASA is emphasizing small satellites, he argued, not because they are simple and cheap to do. "Just because a spacecraft is small, it doesn't make it easy," he said. "A highly constrained spacecraft can push the engineering, push the ingenuity of the team in a way that, in every way, is comparable to some of these big missions that we're doing."