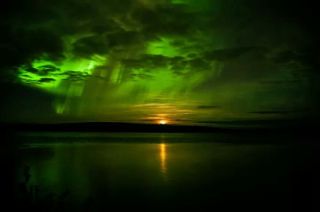 Deep in the sun's core, buried under hundreds of thousands of miles of twisting and convecting hydrogen and helium, a nuclear fire rages. At a temperature of over 15 million kelvins (27 million degrees Fahrenheit), the infernal pressures are high enough to squeeze together hydrogen nuclei, forging elemental helium and releasing a tiny bit of energy. Reaction after countless reaction, this energy accumulates and, in the form of photons, makes its way to the turbulent surface.

Once free, the photons race through empty space, bathing the solar system in radiance and heat. But they are not alone. The pent-up energies in the heart of the sun drive the surface into a boiling frenzy, and this kinetic turmoil unleashes floods of particles — the hydrogen and helium constituents of the sun's coronal atmosphere itself — that accelerate outward into space.

It's the solar wind. [The Sun's Wrath: Worst Solar Storms in History]

The radiation from the sun, traveling at the speed of light, wins the race against the particles and reaches Earth first. Once it's there, a complicated dance unfolds. Some light bounces off the atmosphere, while some beams are absorbed by the miles and miles of nitrogen, oxygen and carbon dioxide. Still others make it all the way to the surface. But no matter where the sun's light ends up, its radiance is not distributed evenly. Due to the tilt of Earth, the equator basks in an unfair glow year-round, leaving the poles locked in darkness for alternating halves of each year.

Without any other physics, the hot air and water of the equator and the cold air and water of the poles would attempt to equalize themselves, with tremendous north-south winds blasting over Earth's surface and ocean currents racing through the waters, ferrying and redistributing energy as they go. But an effect of our planet's rotation called the Coriolis force turns these straight-line winds and ocean currents into massive gyres, circulation systems stretching across oceans and continents.

The sun is the ultimate source of our weather systems, and Earth's rotation makes those systems fantastically complex, with unexpected outcomes, like the gulf stream carrying warm water and air to mainland Europe and even Iceland, keeping them far more temperature than their latitudes would suggest.

But the sun, for all its might, is not the only source of heat on the planet.

While the Earth doesn't affect our weather, it is hot on the inside, too. The loose cloud of gas and dust that coalesced to form our planet released a huge amount of energy as the cloud collapsed, and despite molding Earth over 4 billion years ago, our planet still retains some of that primordial energy.

What's more, Earth formed with a fair amount of radioactive elements, like uranium and plutonium. Most of those metals are buried deep in the core and mantle, and over the eons, they diminish as they decay into lighter elements, releasing heat in the process.

These two sources are the primary generators of Earth's internal heat, keeping the planetary hearth warm against the cold vacuum of space. This heat drives our planet's geologic processes: Volcanoes and hot springs are taps into the molten fire under our feet, and the achingly slow grinding movements of the continental and oceanic plates themselves are compelled by Earth's own energies.

The heat deep in our planet's core powers something else, too. As Earth formed, the heaviest elements, like iron, sunk inward, and the high temperatures liquefied them, forming a malleable, molten center. The planet's rotation — the same one that drives our peculiar weather patterns — spins the core as well. This core of charged metals raises a powerful magnetic field, a field far stronger than that of any other rocky world in the solar system — yet another reason to count our home as unique. [Shields Up! How the Earth Got a Force Field]

While the sun's radiation races to Earth and drives our weather, the comparatively lethargic — but still zippy, moving at a speed of over 1 million mph (1.6 million km/h) — solar windeventually encounters our world as well. These high-energy particles are perfectly capable of stripping away our planet's thin atmosphere, flinging our helpless nitrogen and oxygen away molecule by molecule, and thus stripping our planet of its security blanket.

We think this is what doomed Mars to its dry, frozen, dead fate long ago. But our planet has something that Mars doesn't: its magnetic field. The solar wind is made of charged particles, which interact with the — literal — force field surrounding our planet. Some particles bounce off completely, careening into entirely new trajectories. Others, the ones with the highest energies, do make it through to the atmosphere and can even reach the surface. But thankfully, those are relatively rare. These charged particles are capable of slicing right through DNA chains, increasing cancer rates.

But some solar-wind particles get trapped by the magnetic fields enveloping our world, forcing them to follow the familiar North-South lines, where the particles get dumped into the polar regions of our planet.

It's here — where the solar wind meets Earth's atmosphere — where we get the shimmering green and red effervescent curtains of the aurora. The solar wind particles, guided by Earth's magnetic field, slam into oxygen and nitrogen, temporarily stripping them of electrons and forcing them to glow.

It's a pretty sight and the result of a complex interplay between our planet and our nearest star. It's where Earth's magnetic field, powered in part by nuclear fission in our planet's core, meets the solar wind, sourced ultimately by nuclear fusion in the heart of the sun.

Learn more by listening to the episode "Why is Iceland so warm?" on the Ask A Spaceman podcast, available on iTunes and on the web at askaspaceman.com. Thanks to the AstroTourists who joined in me in Iceland for the questions that led to this piece! Ask your own question on Twitter using #AskASpaceman or by following Paul@PaulMattSutter and facebook.com/PaulMattSutter. Follow us @Spacedotcom, Facebook and Google+. Original article on Space.com.