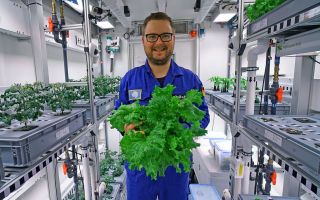 Antarctica is not the most likely place to find fresh ingredients for a salad.

But German scientists have just collected — and eaten — their first batch of lettuce, cucumbers and radishes from a new greenhouse on the frozen continent.

"It tasted as if we had harvested it fresh from the garden," Bernhard Gropp, the manager of the Neumayer Station III, a German research facility in Antarctica, said in a statement.

The shipping container-size greenhouse, called EDEN ISS, was installed in February about a quarter-mile (400 meters) from the research station, which is located on the Ekström Ice Shelf. The food-growing lab is providing welcome fresh veggies for Gropp and his other isolated colleagues during long missions in Antarctica. But EDEN ISS has a loftier mission; the facility is  an experiment led by the German Aerospace Center (DLR) designed to test the best methods for cultivating crops for astronauts.

Space-grown plants could help sustain crews on long missions inside the International Space Station (ISS), or at farther destinations like the moon or Mars, where deliveries of fresh food would be less practical.

With such a hostile environment outside, the Antarctic greenhouse indeed has conditions like those of a spacecraft: It has no soil and no natural sunlight, and it has to operate as a totally closed system, with its water distribution, purplish artificial lighting and carbon dioxide levels tightly controlled. [Icy Images: Antarctica Will Amaze You in Incredible Aerial Views]

Many of the systems can be managed remotely from Europe. But DLR scientist Paul Zabel is in Antarctica with the greenhouse, spending about 3 to 4 hours each day taking care of the plants. Zabel has so far collected 8 lbs. (3.6 kilograms) of lettuce, 70 radishes and 18 cucumbers in the first harvest, according to the DLR's announcement yesterday (April 5).

The researchers are also growing herbs like basil, parsley, chives and cilantro. They've posted photos of tiny tomatoes growing on the vine. The scientists said they are still waiting, however, for a successful sowing of strawberries, the most sensitive of the plants being tested inside EDEN ISS. The team said it hopes the greenhouse will be fully operational by May, producing up to 11 lbs. (5 kg) of fresh veggies each week.

"We have learned a lot about self-sufficient plant breeding in the last few weeks," project manager Daniel Schubert said in the statement. "It has become clear that Antarctica is an ideal test field for our research."

The EDEN ISS greenhouse is just the latest in a long tradition of plant-growing attempts in Antarctica. During Capt. Robert Falcon Scott's Discovery expedition to Antarctica from 1901 to 1904, a botanist was able to grow plants like cress and mustard in soil boxes placed under the ice-trapped ship's skylight during the summer; he even tried growing plants on flannel. Since then, at least 46 different plant-production facilities have sprouted in Antarctica, according to a 2015 study.

Plant-production experiments are already flying in space, too. Astronauts aboard the ISS recently harvested small batches of lettuce from growth chambers.