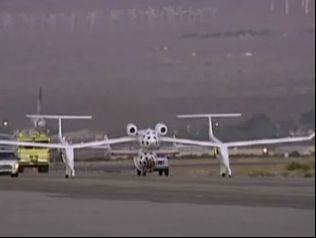 SpaceShipOne, with pilot Brian Binnie at the controls, rolls onto the runway tucked under its White Knight mothership during its second Anasari X Prize flight attempt on Oct. 4, 2004.
(Image: © Ansari X Prize.)

MOJAVE, CALIFORNIA - The White Knight mothership that cradles SpaceShipOne is airborne and headed for the second of two flights to cash in on the $10 million Ansari X Prize.

Piloting SpaceShipOne is Brian Binnie. Binnie is a program business manager and test pilot at Scaled Composites, which built the vessel. He has 21 years flight test experience including 20 years of naval service in the Strike-Fighter community. He has logged more than 4,600 hours of flight time in 59 different aircraft and is a licensed Airline Transport Pilot.

The choice may surprise some who have been following the race for the Ansari X Prize. SpaceShipOne was piloted by Mike Melvill last week in its first X Prize flight, and Melvill flew the craft in its maiden voyage to space in June.

Departing here at the Mojave Spaceport shortly after sunrise, the mated craft will now fly up to some 47,000 feet above the desert, taking an hour to do so. At that altitude, SpaceShipOne will be set free.

Seconds after being released from the White Knight, SpaceShipOne's hybrid rocket motor will be ignited, boosting the craft up to 62.5 miles (100 kilometers) altitude - a target point required by the X Prize Foundation of St. Louis, Missouri in order to win the cash prize.

Some 45 minutes after release from the carrier plane, SpaceShipOne is slated to land at the Mojave Spaceport.

If successful, the organizers of the event, as well as the spacecraft's designers, hope to kick-start the space tourism industry. It was announced last week by British entreprenuer Richard Branson that his company, Virgin, would offer sub-orbital space jaunts to paying customers on board a fleet of SpaceShipOne rocketplanes.

"This is a bigger event than [Dennis] Tito's flight because it's showing that the technology is coming to meet the market, " said Eric Anderson, president of Space Adventures, a company that markets space tourist flights, including Tito's trip to the International Space Station. "Things are happening at a faster clip, faster than what the public expected. There's a huge amount of latent energy about to be released into commercial space."

The Ansari X Prize is a $10 million purse for the first privately-built vehicle that can haul a pilot and the equivalent weight of two passengers to the edge of space -- then repeat the feat within two weeks.

Last week, SpaceShipOne, under the controls of pilot Mike Melvill, coasted above the 100 kilometer altitude point and successfully completed the first of the back-to-back X Prize flights.

That September 29th flight -- also dubbed X1 - saw SpaceShipOne soar to a reported 337,500 feet. Melvill's rocket ride was not without incident. The craft rolled nearly 30 times in an unplanned manner as it shot faster than a bullet out of Earth's atmosphere.

Melvill was able to dampen out the roll, reentered the atmosphere, and made a controlled glide and landing at the Mojave Spaceport. This flight was deemed by a team of judges as a successful first flight for the $10 million Ansari X Prize.

SpaceShipOne is under the controls of a single pilot, but is weighted as if two additional people were aboard. For the Ansari X Prize flights, the rocketplane is being boosted by a larger, stronger engine than previously used for powered flights.

There is significant additional performance in the hybrid rocket motor, enough to propel SpaceShipOne on a far higher suborbital trajectory than required by the Ansari X Prize rules.

If SpaceShipOne makes a successful X2 run today and snares the Ansari X Prize $10 million, the win won't dull the enthusiasm of other rocketeers building suborbital vehicles, predicted Peter Diamandis, head of the X Prize Foundation, in a pre-flight interview with SPACE.com.

"If the Ansari X Prize is won...I think you'll see the first Canadian, the first Russian, the first British, the first Romanian...all the X Prize teams outside the United States will continue their work to become the first of their nation to carry out a first private flight into space," Diamandis said. "I think that's still huge news."