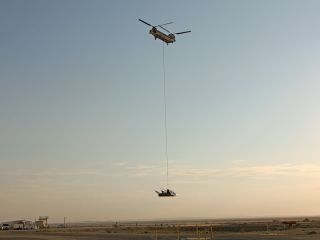 Dawn breaks over Armstrong, and Dream Chaser is ready for flight.

During a captive carry test, the space plane does not fly autonomously, but is suspended from another vehicle.

Dream Chaser takes to the skies, suspended by a 200-foot-long chord (60 meters) from a helicopter.

Up in the Air

The space plane performed nominally during the test.

To reach orbital destinations like the International Space Station, Dream Chaser will hitch a ride to space on a rocket.

The 60-foot-long Dream Chaser space plane has been selected by NASA to fly cargo to the International Space Station as early as 2020.

A closeup of Dream Chaser.

Sierra Nevada is planning one more captive carry test in 2017, followed by an autonomous landing test.