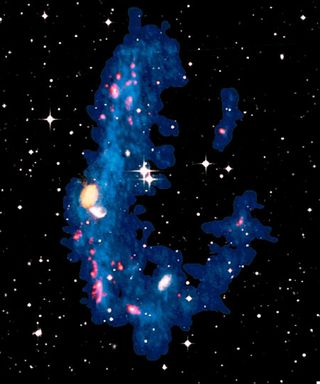 Galaxy NGC5291 (orange, at the center) and its ring of debris (in blue) as seen by the Very Large Array interferometer. Researchers have found evidence for the presence of dark matter in dense star-forming groups (shown in red), where 'recycled' dwarf galaxies exist.
(Image: © P-A Duc/CEA-CNRS/NRAO-NASA)

Theuniverse may be filled with shining stars, but nearly 85 percent of all mattercan't be seen, calculations show. In the hunt for the invisible,astrophysicists have turned up a small but new hiding place for mysterious darkmatter: "recycled" dwarf galaxies produced from nastygalactic collisions.

Thediscovery, detailed today in the online version of the journal Science,challenges the notion that darkmatter hangs out in halos around large galaxies. Instead, it might be foundwithin the galaxies.

Dark matteracts as gravitational glue, holding millions or billions of stars together ingalactic globs or disks. Without it, "our own galaxy should have fallen apartby now," said Frederic Bournaud, an astrophysicist with the French AtomicEnergy Commission (Commissariat a l'energie atomique). "So dark matter--thisunseen force--is somewhere keeping it glued together."

Scientistshave no firm idea what dark matter actually is. They haven'teven agreed on a single definition for the mysterious stuff, because they canonly guess as to what it's made of. While dark matter is a source of gravityand reacts with regular matter on large scales, it has no measurable effect onsmall scales (like within our solar system), there is no picture of it andthere's no known way to detect it directly.

Conventionalmatter, called "baryonic" matter, is the stuff of plants, rocks, stars andthings we can touch or at least see. But some baryonic matter is not easilyseen, because it's in the form of cold gas or faraway, dark, burned-out stars.Some researchers use the term "dark matter" to refer to thishard-to-see regular matter.

But theoverwhelming majority of unseen matter is probably the highly unconventional,yet-to-be-described "non-baryonic" matter, and most scientists limit theirdefinition of dark matter to this strange form.

Disagreementsaside, so far the bulk of dark matter has only been detectedindirectly. One method, for example, takes a galaxy's visible matter,calculates how fast it should be moving and then compares that to the actual,observed speed. For large galaxies, the calculations show visible matteraccounts for only 10 percent of the mass that should be there.

But bycombining telescope images, calculations and computer models, Bournaud thinkshe and his team might be a little closer to finding and identifying more of theuniverse's missing mass.

To discovermore clues about dark matter, the astrophysicists aimed the Very Large Array ofradio telescopes in New Mexico at NGC5291, a galaxy cluster about 200 millionlight-years away. It resembles a ring, crowned with one large galaxy at thecenter and studded with smaller dwarf galaxies in a cloud of cosmic debris.

How doessuch a curious group of galaxies form?

"About 360million years ago a large galaxy collided with NGC5291, which used to be aspiral galaxy," Bournaud said. Several suspects are in the area, but IC4329 isthe prime candidate--with a lined-up trajectory and six times the mass ofNGC5291, it's remained relatively unchanged from the probable cosmiccollision, much like a car often remains unscathed after hitting a cyclist.

If darkmatter does hang out at the edges of large galaxies, little or none should befound in the recycled dwarf galaxies. But Bournaud has discovered that visiblematter makes up only one-third of the mass in the tiny galaxies--so largegalaxies probably contain most dark matter within their galactic boundaries,not in a halo around them.

Bournaudthinks about half of the unseen mass in the recycled galaxies is plain oldhydrogen gas. "But that's only a guess," Bournaud said, adding that telescopesshould eventuallybe able to detect it. Regardless of whether or not the hidden matter isregular matter or dark matter, however, current theories about recycled dwarfgalaxies and dark matter location are being put "to the test," according to thestudy.

He givessome of credit for the discovery to dramatic advances in computing. "Even 10years ago, simulations were far behind telescope observations," he said. Likepolice reconstructing accident or crime scenes by combining eyewitness reportsand forensic measurements, "today astrophysicists are combining what they seewith computers models to make discoveries."

The nextstep in adding weight to the theory, Bournaud said, is to look at otherrecycled dwarf systems. "If we can better understand galaxy formation, we canfind more dark matter," he said.