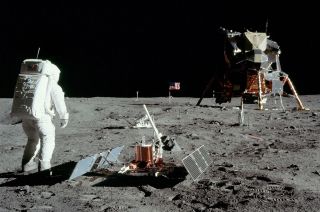 The nonprofit group For All Moonkind is working to protect all six Apollo landing sites on the moon, such as Apollo 11's Tranquility Base, seen here in 1969.
(Image: © NASA)

The group, called For All Moonkind, aims to work with space agencies around the world to draw up a protection plan, which will be submitted to the United Nations in the summer of 2018.

"The goal is to present them something that's already pre-agreed, so they can't turn it down," For All Moonkind co-founder Michelle Hanlon said last week at the Starship Congress 2017 conference here. [NASA's 17 Apollo Moon Missions in Pictures]

The effort will be modeled on the United Nations Educational, Scientific and Cultural Organization's World Heritage Convention, which preserves sites of cultural and natural significance here on Earth, For All Moonkind representatives said.

The Apollo sites — where 12 astronauts walked and worked during six separate moon missions from 1969 to 1972 — do not yet have formal protection. And it's not a great idea for the United States to unilaterally declare these zones off-limits, because the 1967 Outer Space Treaty states that nations cannot claim territory on the moon or any other cosmic object, Hanlon said. (The U.S. does own the flags and other gear that the Apollo astronauts left behind, but their footprints and other parts of the lunar surface do not belong to anyone or any country.)

Hence the push for international cooperation involving the U.N. (specifically, the body's Committee on the Peaceful Uses of Outer Space).

"If we cannot achieve peace on Earth, certainly we can work together to preserve peace in the heavens," For All Moonkind representatives wrote on the group's website. "And conserving the Apollo landing sites as human accomplishments, protected by United Nations decree, is a first step toward affirming the universality of our shared posterity under a unified regime."

The time to get the ball rolling is now, Hanlon said at Starship Congress 2017. She cited a coming boom in private moon exploration, the first stages of which may kick off just a few months from now as the five teams left in the Google Lunar X Prize work to claim the $20 million grand prize before it expires on Dec. 31.

Enforcement of any U.N. decree regarding space sites will likely fall to the signatory nations, not the U.N. itself, Hanlon said, citing restricted launch licenses and fines as possible penalties for violations.

"Ideally, it would work on the principle of reciprocity," Hanlon told Space.com. "The U.S. could say to China: 'You agree to leave the Apollo sites alone, and we won't touch the Jade Rabbit [Chinese moon rover]."